Verdict a crushing blow to both AGP, the regional party and Congress as its chief quits taking 'moral responsibility' for rout 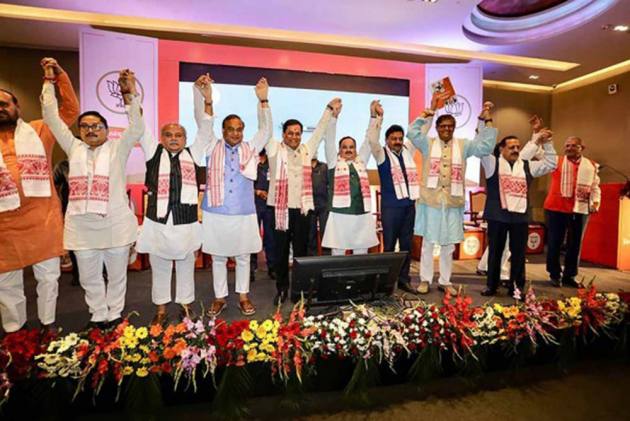 “It is a victory for development politics… it is a vote to preserve our culture and civilisation,” Assam health minister Himanta Biswa Sarma said on Sunday amid the NDA gearing up to retain power in Assam.

At the time of filing this copy, the saffron alliance was leading in 77 of the 126 Assembly seats and the Congress-led Mahajot was ahead in 47 seats. The Raijor Dal won the Sivasagar seat.

The BJP is likely to bag 59 seats, and the Asom Gana Parishad (AGP) and United People’s Party (UPPL) are expected to win 9 and 7 seats respectively.

The Congress will win a minimum of 31 seats and its allies, the AIUDF and BPF, are likely to win 15 and 4 seats respectively.

“I bow before the people and thank the AGP and UPPL for this victory,” Sarma told reporters on Sunday evening. “We will fulfil each and every promise that we made and will get to work from day one,” he added.

The defeat of Assam Pradesh Congress Committee president Ripun Bora from Gohpur was particularly a huge embarrassment for the Congress.

Late Sunday, Bora tendered his resignation to party chief Sonia Gandhi, accepting moral responsibility for the Congress’ “humiliating defeat” in the state and for not being able to combat the “divisive and communal politics” of the BJP.

“Madam, I am extremely saddened and disheartened to inform you that despite my immense hard work we were unable to combat the divisive and communal politics played by the BJP and RSS. Despite all odds, I did the best in my capacity to revive the party during the last four years as President of Assam PCC,” Bora wrote in his letter adding that he will continue to fight to uphold Congress’ ideology in the state.

The party will have a lot to introspect if it nurtures any hope of returning to power in the state.

The BPF also suffered a setback as three of its ministers Rihon Daimary, Pramila Rani Brahma and Chandan Brahma lost. The BPF is an ally of the BJP in the outgoing Assembly.

The victory of Raijor Dal’s Akhil Gogoi, who contested from jail, is likely to give a glimmer of hope to many local parties, which were otherwise side lined by the BJP and the Congress in this election. Gogoi is currently in jail for partaking in anti- Citizenship Amendment Act protests.

Meanwhile, the AGP’s performance in this election was worse than its 2016 performance, when it had won 14 seats.

Another regional party, the Asom Jatiya Parishad, also fared badly failing to win a single seat. Party president Lurinjyoti Gogoi lost from both the seats he had contested from. Conceding defeat, Lurinjyoti, thanked those who voted for his party. “We only had three months to prepare, but this is not the end of the road for us…we will continue to raise the issues that we have raised,” he said.

The BJP would, however, find it hard to digest the defeat of its Batadrava candidate and actor Angoorlata Deka who lost to the Congress. Soon after counting started, she had conceded defeat and said that now everything was up to god.

Further, Gautam Roy, who had deserted the Congress to join the BJP also lost while another turncoat Ajanta Neog won from Golaghat.

According to Sarma, the swearing-in ceremony of the new government will take place on an auspicious day in the near future.

At the moment, the BJP top brass will have to decide the CM candidate, with the party having to choose between Sarna and outgoing chief minister Sarbananda Sonowal.