Assam: A viral video on social media sites showed five to seven youth wearing saffron scarves, and claiming to be from the Bajrang Dal asking the Hindus to stay away from the Christmas celebrations. 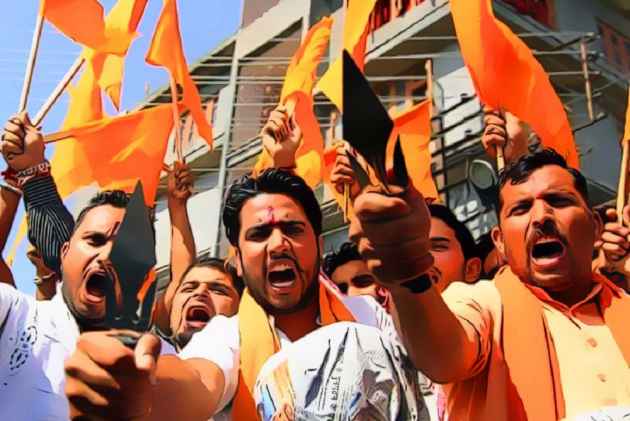 Miscreants with alleged links to a right-wing organisation disrupted a Christmas programme in Silchar town of Assam's Cachar district, demanding that Hindus should shun the celebrations.

Seven people allegedly involved in the incident have been detained so far, a senior police official said.

Cachar Superintendent of Police Ramandeep Kaur told PTI that the incident occurred during the celebration of Christmas in a field in the town on Saturday.

Some boys went to the venue and asked the Hindus present there to not participate in the celebration.

“They did not object to the Christians celebrating the occasion,’ she said.

Kaur further said police have not received a complaint against the incident, though seven youngsters have been detained in this connection.

“We are looking into the incident. We don't have any inputs on the involvement of any group so far,” the SP added.

Locals, however, claimed that the miscreants were associated with the Bajrang Dal.

According to eyewitness reports, the boys chanted ‘Jai Shri Ram' and allegedly started manhandling people present at the venue.

The incident happened at around 9 pm when the venue was crowded with people.
Many people were busy taking selfies and photographs when the trouble started.

When the revellers questioned the youngsters on why they were objecting to the celebration, the boys reportedly told them that as Hindus they should be celebrating ‘Tulsi Diwas' that coincided with Christmas.

A video uploaded on social media sites showed five to seven youth wearing saffron scarves and claiming to be from the Bajrang Dal asking the Hindus to stay away from the celebration.

The boys further said that they were not imposing any restriction on the Christians to celebrate the day, but wanted the Hindus to refrain from it.

Meanwhile, condemning the incident, Congress Lok Sabha MP Abdul Khaleque said it was a “failure” on the part of the state government.

Khaleque said, “The chief minister is encouraging hatred campaign through his speeches at times.”

The Congress leader, however, did not elaborate on his allegation against the chief minister.
AIUDF legislator Ashraful Hussain said people should have the freedom to celebrate without any fear.

“We have seen that minority communities are often targeted during their celebrations. I think the police should remain alert to thwart such incidents,” he said.

Hussain also urged the police authorities to expedite investigations and book the culprits.