The Congress had organised the 'Raj Bhavan Gherao' programme here to demand repeal of the 'anti-farmers black laws' and alleged price rise in the country. 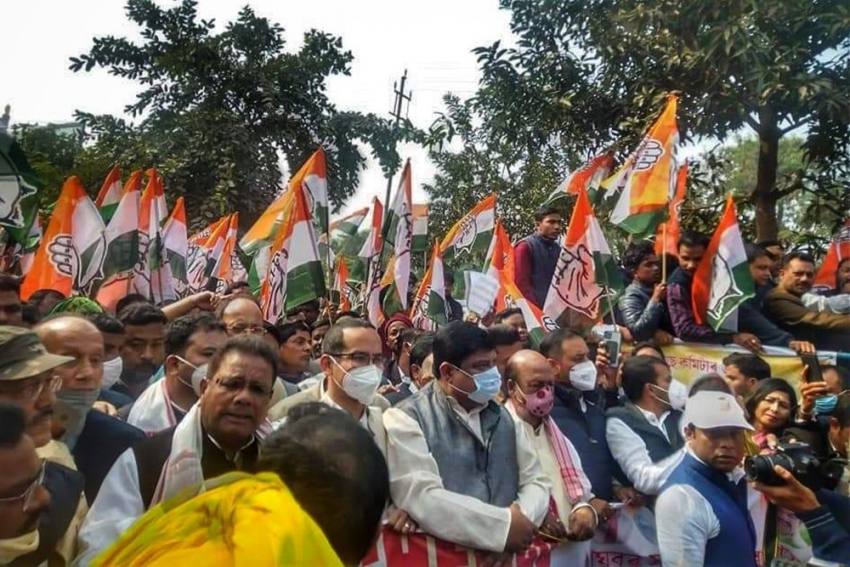 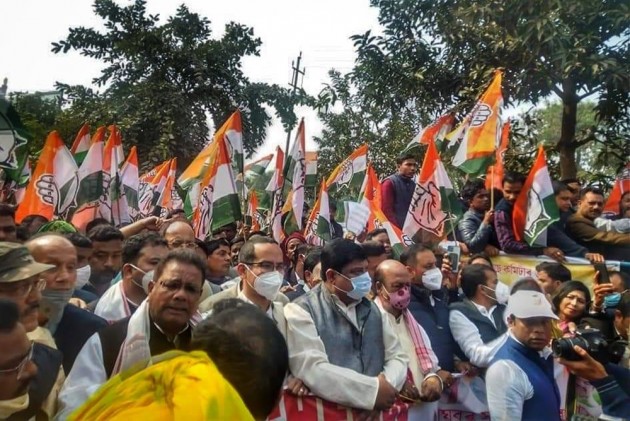 Assam Congress unit president Ripun Bora including several other senior Congress leaders, along with hundreds of party workers were taken into custody Saturday while marching towards Raj Bhavan to demand repeal of the new farm laws.

The Congress had organised the 'Raj Bhavan Gherao' programme here to demand repeal of the 'anti-farmers black laws' and alleged price rise in the country.

Among other prominent persons who were taken into custody were Leader of the Congress Legislature Party in the state Debabrata Saikia, his deputy Rakibul Hussain and Lok Sabha MPs- Gaurav Gogoi, Pradyut Bordoloi and Abdul Khaleque- police said.

Farmers issue is likely to be an important poll agenda in the Assam assembly election due in March-April this year.

The Congress will be going to the poll without its tall leader and three-time state chief minister Tarun Gogoi, who died on November 23.

The party had organised a meeting during the day at the Ambari round-about and following that they began a march towards the Raj Bhavan but were stopped by the police.

The police claimed that they did not have the necessary permission, but Bora later told reporters that they were given permission by the Kamrup Metropolitan district administration.

The police resorted to a mild lathi-charge to stop the protestors from marching towards Raj Bhavan and subsequently took the leaders along with hundreds of party workers into custody.

They were later released.

Bora further claimed that though they had received permission, but the police prevented Congress workers from coming to the city from different parts of the state.

"The police stopped our workers at different parts of the state, their vehicles were seized but this did not deter them and they sat on dharna where they were stopped", he said.

The BJP government led by Chief Minister Sarbananada Sonowal is no longer a "government of the people but this government exists only in aeroplanes, helicopters, huge hoardings and advertisements in the newspapers", he alleged.

Sonowal was a student leader and came to power through various protest movements and agitations but "it seems, he has forgotten all norms of democratic protests and rights", the Pradesh Congress president said.

The government is trying to hoodwink people by making false promises and through "fake and misleading schemes", he alleged.

"If the government is doing good work, then why does it have to hoodwink people through fake and misleading schemes or deny our democratic rights by using police force against us", he said.

The farmers are protesting in the national capital for past two months and 60 of them have lost their lives, but the government has no time to listen to them, he said, adding price rise is so high that in many homes in Assam, people could not celebrate Bhogali Bihu festival.

"The people of Assam will give a befitting reply to the BJP government in the next elections and I request them to be patient for two more months", Bora said.

The Congress will continue with its protests against the BJP government and on January 22, party workers from each block will cycle to the sub-divisional offices to protest against the "anti-people and anti-poor" policies of the BJP, he added.