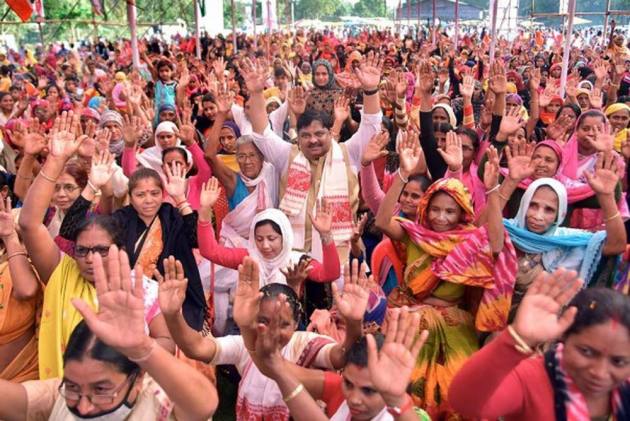 Most of the political parties have released their first list of candidates for the upcoming Assam Assembly elections. Out of the 223 names that have been announced, only 19 are women.

To lure the 49.35 per cent strong women electorate in Assam to vote for them, parties make a lot of promises. But as evident with the release of the first candidacy lists, all the parties have scored low in the gender equality parameter.

The Congress has given seats to six women in their first list of 43 candidates for the first phase of polling on March 27.

The ruling BJP has named four women out of the 70 candidates announced for the first two phases while its alliance partner-the Asom Gana Parishad (AGP)- has mentioned only one in its first list comprising eight nominees.

The saffron party has renominated actor-turned-politician and sitting MLA Angoorlata Deka from Batadroba, besides fielding former Congress minister Ajanta Neog, who recently joined the party, from Golaghat seat and Surabhi Rajknowar from Sibsagar for the first phase polls, along with Nandita Garlosa from Haflong (ST) constituency which will go to polls in the second phase on April 1.

The AIUDF, a part of the opposition Grand Alliance, has only one woman, Minakshi Rahman, out of the 16 candidates announced so far and she has been given the Sarukhetri seat.

Newly floated regional parties, the Assam Jatiya Parishad has six women out of the 67 candidates, while its alliance partner Raijor Dal has one woman candidate out of the 19 candidates declared so far.

The opposition Congress has renominated sitting MLA Roselina Tirkey from Sarupathar, former ministers Pranati Phukan from Naharkatiya and Bismita Gogoi from Khumtai along with Pallavi Gogoi from Teok and Angkita Dutta from Amguri. Besides Tirkey, the rest four had been defeated by a narrow margin in the 2016 assembly polls.

The lone new woman contestant in the Congress is Sibamoni Gogoi from the Batadroba constituency.

The AGP has renominated former deputy speaker of the assembly and sitting MLA Renupama Rajkhowa from the Teok constituency.

Teok and Batadroba are likely to witness a direct contest between two women contestants of rival parties.

The AJP has also fielded Ribulya Gogoi from Sibsagar, Janmoni Bora from Tezpur, Shamzida Yasmin from Laharighat, Moushumi Sarma from Lumding, Rina Saikia from Golaghat and Putuli Kayastha from Naoboicha.

Raijor Dal has given party ticket to Dilwara Begum Choudhury from Jamunamukh.

Other parties, like the Bodoland Peoples Front (BPF) with two sitting MLAs in the outgoing assembly, are yet to announce their nominees.

The two principal parties-the ruling BJP and the opposition Congress-have rolled out promises to woo this significant slice of the electorate with the saffron party highlighting the steps taken by the state government for the welfare and empowerment of women in various sectors like agriculture, animal husbandry, dairy, handloom, education and maternal health.

The Congress, in its five-guarantee campaign for the upcoming elections, has promised fifty per cent reservation for women in government jobs, Rs 2,000 monthly income support to homemakers and raising the daily wage of tea garden workers, comprising mostly women, to Rs 365.

The elections to the 126-member Assam assembly will be held on March 27, April 1 and April 6.