Presently, 226 relief camps are operational with 1.01 lakh inmates and 562 relief distribution centres are functioning in the state. 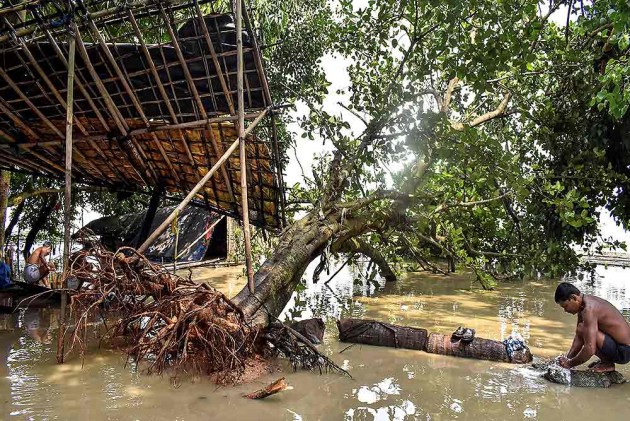 The Centre has reached out to the Assam government after the floodwaters wreaked havoc in the state killing at least 17 people and affecting over 45 lakh people.

Union Minister Jal Shakti Gajendra Singh Shekhawat visited Assam on Tuesday to asses the situation in the state and emphasised a long-term solution to the problem.

Shekhawat said the Centre will release Rs 251.55 crore as grant as its share to the State Disaster Relief Fund (SDRF) for this year.

The minister said that pilot projects to dredge the river bed can also be carried out after Hydro graphics survey.

“After the assessment of the hydrologists, we can try and if dredging or other means can be applied. After today’s meeting, the need for such an action is thought to be necessary. We can identify some locations and apply pilot projects so that a solution can be found.

"There were some discussions on building some raised platforms not only for the human habitations but also for the national parks. We have some positive results in this regard. We need to adopt similar actions,” Shekhawat said after taking an aerial survey of the flood-affected districts of Upper Assam mainly Dibrugarh, Lakhimpur, Majuli.

Shekhawat also directed the state water resource department officials to submit a detailed report to his ministry on the progress of 34 projects currently underway in the state and the bottlenecks faced by these projects. He assured of expediting the payments of funds for the project and sort out other technical issues affecting the projects.

Meanwhile, the death toll of animals, too, has increased to 30, including 3 rhinos, at the Kaziranga National Park. Among others, hog deer suffered the maximum casualties with at least 19 of them losing their lives.

On Tuesday at least four people died in Morigaon, three in Golaghat, two each in Dhemaji, Jorhat, Nagaon, Kamrup (Metro) and Dima Hasao districts and one each in Dhubri, Goalpara, Hailakandi and Barpeta. A total of 4,620 villages in 124 revenue circles of 32 districts were affected.

Presently, 226 relief camps are operational with 1.01 lakh inmates and 562 relief distribution centres are functioning in the state.