Assam chief minister Himanta Biswa Sarma and his Meghalaya counterpart Conrad Sangma held discussions in Guwahati and decided to set up committees headed by cabinet ministers to try and find solutions to the border disputes. 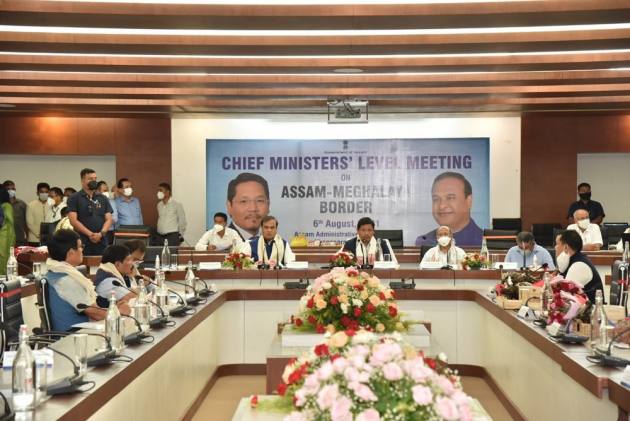 Assam and Meghalaya on Friday identified six areas of dispute between them and decided to set up committees headed by cabinet ministers to try and find solution. These six out of a dozen are perceived to be less complicated and, therefore, easier to handle.

The decision came at the second round of talks between Assam chief minister Himanta Biswa Sarma and his Meghalaya counterpart Conrad Sangma in Guwahati. The first round of discussion was held at Shillong on July 23.

Speaking to reporters after the meeting, Sarma said each state would form three regional committees headed by cabinet ministers. These committees would visit the respective areas and hold discussions with panchayat members and the civil society to get their views. Following this they would hold consultations among themselves and finally make presentations before the two chief ministers after 30 days.

Hopeful that after this meeting we will be able to come out with a common agenda of strengthening the long standing friendship between Assam & Meghalaya and continue contributing to the development of India.


“We will largely authenticate the findings and recommendations because the committees would have held their discussions,” Sarma said. “If still there are points of differences, then we will take up the matter between us or even go to a higher forum if required,” he said. But even as the committees go about their task, the two chief ministers will visit Langpih, which falls in the ‘complicated’ category, to send out a message to the people that they were keen and willing to find a solution to all the disputed areas.

He said that the meeting agreed that both the states would respect each other while finding a way out of the morass.” The strategy which both the state governments have agreed to follow is to take up these matters in a phase-wise manner”, he said. He said the focus would be on historical facts, ethnicity, administrative convenience, willingness and the overall sense of the people's sentiments and contiguity while arriving at any conclusion.