Ahmed who has been in the trade of designing for more than three decades also does costume designing for films and theatre in Assam. 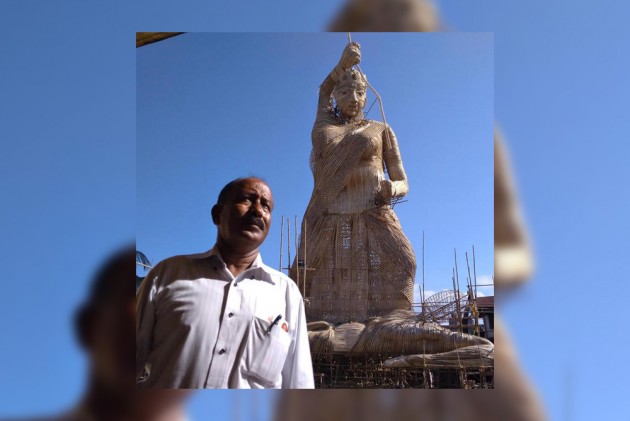 Guwahati based artist Nuruddin Ahmed, who built a 98-feet Durga Idol made of bamboo during the 2017 Durga Puja at the Bishnupur Sarbajanin Puja Committee' pandal, has been enlisted in the Limca Book of Records as the tallest Durga idol.

Confirming the report Nuruddin Ahmed, who is also a Sangeet Natak Akademi awardee, said that he is happy to have got the recognition.

“Hard work paid off. I’m thankful to everyone who helped me and supported me throughout the mission. Without the support of the people, it wouldn’t have been possible. I’m happy,” an elated Ahmed told Outlook.

During the process of building the tallest Durga idol, he had to face many difficulties after a storm damaged his 70 per cent of works.

“Then I re-started my work and completed it in seven days with the help of 40 co-workers,” he said.

Many would find it little awkward for a Nuruddin making a Durga idol, but for him it’s worshiping the art. Ahmed has long been associated with designing and making structures of various gods and goddess in Assam and other places as well.

“I’m an artist. For me religion, caste, creed all these do not matter at all. I’m a worshiper of beauty and I’m happy if the people are happy with my creation,” is what the artist, who also built huge a Lord Ganesh image in Guwahati several years ago, has to say.

His 74 feet in length and 55 feet in height – model of Lord Ganesha as theme of the Puja pandal was appreciated by one and all.

“I think this is the real sense of being an Indian and especially in Assam, Puja is a just a celebration of joy and happiness. We mingle with all and everybody here to make it a memorable one. We all are same and we enjoy every festival. Only a section of people with some other interests or the politicians try to divide is by using some specific terms,” said Ahmed whose son Deep Ahmed also assisted him in the project.

On the other hand, the organising committee also seems indifferent to Ahmed’s religious beliefs. According to them, it’s the artwork which is important for their Puja pandal rather than the personal identity of the artist.

“We respect him as an artist and we are happy that he has agreed to work with us. We are thankful to Ahmed ji for making such a wonderful design which has attracted a huge number of visitors to our pandal,” said a member of the committee.

Ahmed who has been in the trade of designing for more than three decades also does costume designing for films and theatre in Assam.

He was born in Assam’s Nalbari before settling down in Guwahati after spending his childhood in Lakhimpur district.

His association with Puja does not end with designing alone as he has been a judge to award best Puja pandal in Guwahati for several years. Ahmed has won a number of national awards including President’s award in 2003.

Besides, he has a number of achievements over the years. He has done most of the works in Srimanta Sankardev Kalashetra, a hub of cultural heritage of Assam including its main gate and Bhupen Hazarika Museum.