The counting of votes for the assembly polls in four states and a union territory is being taken up at a time when the country is grappling with a raging COVID pandemic. 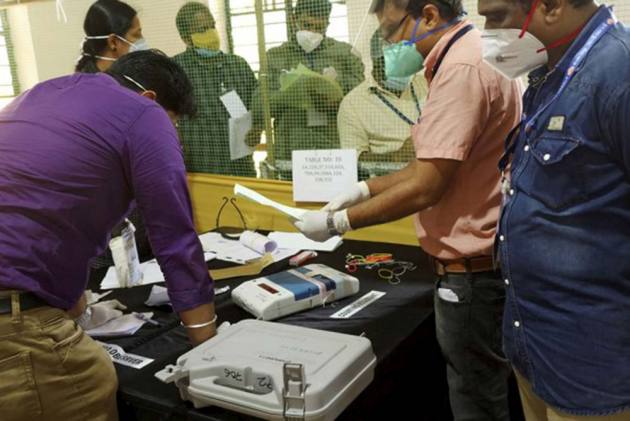 A wheelchair-bound Mamata Banerjee leading the Trinamool Congress to a crushing victory over the BJP has emerged as the biggest story of Elections 2021 though the Bengal chief minister is facing the ignominy of losing at Nadigram against her former close aide Suvendu Adhikary.

Elsewhere, the BJP is set to retain power in Assam and Puducherry and the DMK-led alliance appeared set to end the AIADMK’s ten-year reign. In Kerala, the CPM-led LDF is well on course to end a 40-year-old tradition by retaining power in the state.

The counting of votes for the assembly polls in four states and a union territory is being taken up at a time when the country is grappling with a raging COVID pandemic.

According to trends available, the TMC was leading in 201 seats and the BJP in 89.

The BJP, which had just three seats in the 294-member Assembly after the polls and went to win 18 out of 42 seats in the 2019 Lok Sabha election, had pulled out all the stops in the state in a determined bid to oust Banerjee, a vocal critic of Prime Minister Modi, and add another state to its tally of 17.

The Left-Congress alliance is the third main contestant in the state.

In Kerala, the ruling LDF was leading in 88 of the 140 assembly constituencies while the opposition Congress-headed UDF was ahead in 50 segments as of noon. Chief Minister Pinarayi Vijayan was leading by 3,351 votes in his home turf against his nearest rival C Raghunathan of the Congress, according to Election Commission figures.

In Tamil Nadu, Chief Minister K Palaniswami was leading in his home segment of Edappadi in Salem district and leader of opposition and DMK president M K Stalin was ahead in Kolathur constituency here, according to early trends. While the DMK was ahead in 76 seats, the AIADMK was in 68, according to trends available for 170 out of 234 constituencies.

In Assam, the ruling BJP-led NDA was leading in 81 seats, while the Grand Alliance spearheaded by the Congress is ahead in 45 places, according to available trends. Assam has a 126-member assembly and 64 seats are needed for a simple majority.

In Puducherry, the AINRC-led NDA was leading in 9 seats while the Congress headed alliance was ahead in three segments after first round of counting of votes polled in April 6 elections, officials said.

NRC chief N Rangasamy was leading in his constituency.

Counting of votes began at 8 AM and is likely to continue late into the night with as many as 1,100 counting observers watching the process.

Exit polls had forecast a tight contest between the incumbent Mamata Banerjee-led Trinamool Congress and the BJP in the crucial West Bengal assembly polls and put the ruling saffron combine ahead in Assam while projecting that the Left alliance will retain Kerala, a feat unseen in four decades.

The poll results in the four states and the UT are also likely to reflect how the handling of the COVID pandemic has played on the voters' mind.

Polling was held in eight phases in West Bengal between March 27 and April 29, in Assam in three stages on March 27, April 1 and 6, while votes were cast in Tamil Nadu, Kerala and the Union Territory of Puducherry in a single phase on April 6, when the COVID surge had begun in many of the states.

Kerala, Tamil Nadu and West Bengal are among the 11 states that account for 78.22 per cent of the total active cases, according to the Health ministry.

A three-tier security arrangement is in place in West Bengal's counting centres and 256 companies of central forces deployed across 23 districts of the state that voted in a gruelling election marred by violence and vicious personal attacks.

Counting will also be held in four Lok Sabha seats and 13 assembly seats across 13 states where bypolls were held.

The EC has banned victory roadshows and vehicle rallies.