Counting of votes for the Assembly elections in West Bengal, Tamil Nadu, Kerala, Assam and Puducherry began at 8 am today 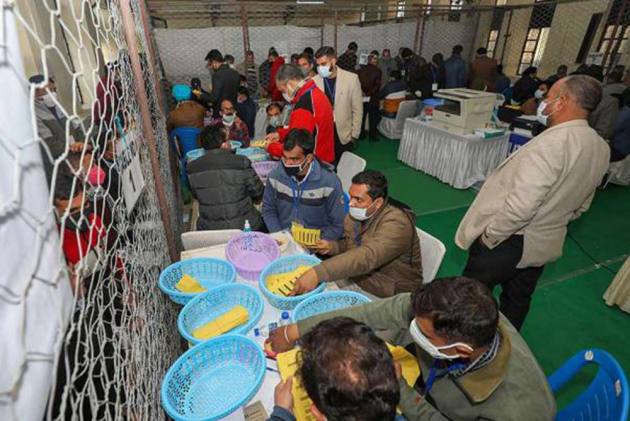 Counting of votes for the Assembly elections in four states and one Union Territory began at 8 am today.

Ballots cast by voters in West Bengal, Assam, Tamil Nadu, Kerala and Puducherry will be counted today to ascertain who will form the next government in these states and UT.

The Election Commission of India (ECI) will conduct the vote counting exercise amid tight security and in the backdrop of the pandemic sweeping across the country.

In order to ensure safety of all ECI officials, the poll body has made it mandatory for all candidates and their agents to show a negative RT-PCR test report or a vaccination certificate before they enter counting centres.

Victory rallies have also been banned in these states to ensure that Covid-19 cases do not escalate during counting of votes.

Counting of votes began at 8 am in 75 counting centres spread across the state with officials taking up a count of postal ballots first, authorities said.

With exit polls predicting a landslide victory for the DMK which was in Opposition for 10 years, the outcome is crucial for the ruling AIADMK as well, which dismissed the prediction and expressed confidence that it would retain power for the second time in a row.

There are nearly 4,000 (3,998) candidates in the fray, including top AIADMK leaders, Chief Minister K Palaniswami and Deputy Chief Minister O Panneerselvam, DMK president M K Stalin and his son and party youth wing secretary, Udhayanidhi Stalin, who is seeking to enter the Assembly for the first time.

Though there were four fronts, including actor-politician Kamal Haasan's Makkal Needhi Maiam-led combine, the key contest is between the ruling AIADMK and main opposition DMK.

The AMMK-DMDK combine and Nam Thamizhar Katchi are also in the fray.

The votes recorded in EVMs would be taken up by 8.30 am and it is also set to be tallied as per rules with Voter- Verifiable Paper Audit Trail (VVPAT).

Counting agents were allowed through specified pathways into counting halls after verifying if they have complied with norms like RT-PCR tests and two doses of Covid-19 vaccination.

Sunday being a complete lockdown in Tamil Nadu to help prevent the spread of coronavirus, the roads were deserted and over one lakh police personnel have been deployed as part of security measures for the vote counting day.

Polls were held to 234 constituencies in Tamil Nadu and by-election was also held to the Kanyakumari Lok Sabha seat, where Congress party's Vijay Vasanth and BJP leader Pon Radhakrishnan are the key candidates.

The postal votes were taken up first for counting first when the counting began at 8 AM.

The counting for the Malappuram Lok Sabha bypoll is also being held.

Of the 633 halls in 114 counting centres in the state, 527 have been earmarked for tabulating Electronic Voting Machines (EVM) votes, while the remaining 106 will be for counting the over four lakh postal votes.

Over 24,000 polling officials are participating in the counting exercise and as many as 30,281 police personnel have been deployed for security duty.

Of the 2.74 crore electorate in the state, 2.03 crore had exercised their franchise in the polls.

Due to the severe surge of the second wave of coronavirus, candidates and polling agents were allowed into the counting centres only if they have taken both the doses of Covid vaccine or if they carried Covid negative certificates.

The ruling CPI(M)-led Left Democratic Front, opposition Congress headed United Democratic Front (UDF) and the BJP-NDA had put up a fierce fight in the run up to the polls.

Exit polls have forecast a tight contest between the ruling Trinamool Congress and the BJP in the eight-phase elections to the 294-member assembly.

The counting will decide the electoral fate of 2,116 candidates including nominees of the Left-Congress-Indian Secular Front alliance.

The exercise is underway in 108 counting centres spread across the 23 districts of the state, where a three-tier security arrangement has been put in place.

At least 292 observers have been appointed and 256 companies of central forces deployed at the counting centres.

Polling to 292 assembly seats was held in eight phases from March 27 to April 29. Voting in Shamsherganj and Jangipur seats in Murshidabad district was postponed due to the death of some candidates.

Polling in these two seats will now be held on May 16 and votes counted on May 19.

In view of the rising number of coronavirus cases in the state, the Election Commission has decided to place tables at the counting halls in such a way that social distancing norms are maintained. All the EVMs and VVPATs at the counting centres will be sanitised before the commencement of the process.

Of the state's 294 assembly constituencies, the most keenly watched will be Nandigram in Purba Medinipur district where Chief Minister and TMC supremo Mamata Banerjee is contesting her protege-turned-adversary Suvendu Adhikari of the BJP.

Banerjee, who is seeking a third term in office, has left Bhabanipur constituency in Kolkata to fight from Nandigram, the epicentre of an anti-land acquisition movement that catapulted her party to power in 2011 ending the 34- year-long Left Front rule.

However, 10 years later, a number of leaders have left the party and joined the BJP ahead of the election which was blotched by violence, vicious personal attacks and jingoistic fulminations.

Exit polls were divided in their forecast for the West Bengal election, where the BJP ran a high-octane campaign in its bid to capture power in the state for the first time by ending Banerjee's 10-year-long reign.

An average polling of 81.87 per cent was recorded in the eight phases.

The electoral fate of 946 candidates including 74 women, who contested the three-phase polls for the 126-member assembly, will be decided during the exercise.

Counting started at 8 am in 331 designated halls where the Election Commission has put in place various measures to ensure strict adherence to Covid-19 protocols, as the state has witnessed a surge in cases.

A three-tier security apparatus has also been installed outside the counting centres.

Over 82 per cent of the 2.33 crore voters have exercised their franchise during the polling held on March 27, April 1 and April 6.

Most exit polls have given a clear edge to the BJP, which is contesting the elections in alliance with the AGP and the United Peoples' Party Liberal. The Congress, on the other hand, formed a 'Grand Alliance' with the All India United Democratic Front and several other parties.