Assembly Elections 2021: Mamata, Sreedharan… Top Names To Watch Out For Ahead Of Results

As many as 1,100 counting observers will watch the process and candidates and agents will have to produce a negative Covid test report or double dose of vaccination certificate to get an entry. 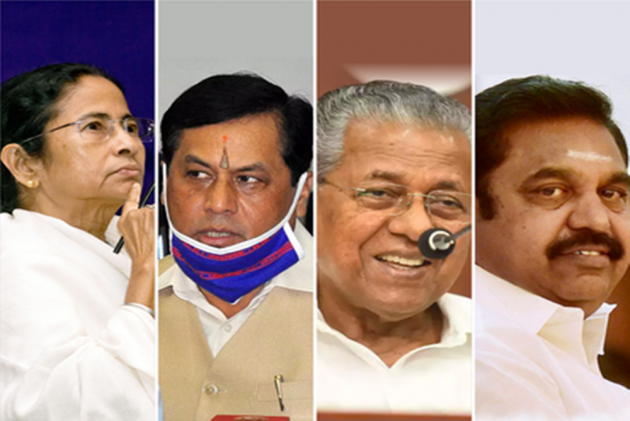 Counting of votes will be held today in the high-stakes Assam, West Bengal, Kerala, Tamil Nadu and Puducherry assembly elections, overshadowed by the raging Covid pandemic, as the BJP seeks to consolidate its hold over more states and the Congress along with its allies attempts to regain turf. They said counting of votes will begin at 8 am and continue late into the night. As many as 1,100 counting observers will watch the process and candidates and agents will have to produce a negative Covid test report or double dose of vaccination certificate to get an entry.

As the final results are awaited, here is a list of big names across these five states/union territories that are important.

TMC supremo and Bengal chief minister Mamata Banerjee have been at a war of words with the BJP for a long – This intensified during the election campaigning in West Bengal. From an alleged attack where she suffered a fracture to accusing BJP of tapping her phone, Mamata has managed to stay in the news. On wheelchair days after the attack, Mamata hit the road again and resumed her campaigning. She filed her nominations from Nandigram against BJP’s Suvendu Adhikari who was her close aide until late last year.

The Nandigram seat has everyone’s attention to see who wins,

Once Mamata’s close aide, Suvendu Adhikari switched sides to join BJP and contested against Mamata in a battle of prestige from Nandigram. He resigned from Mamata’s government in November 2020. From accusing the TMC chief of indulging in ‘minority appeasement politics to challenging her on the political battlefield, his political trajectory has been an interesting one.

He has some edge in the final results if we go by the exit polls. He teamed up with Congress and contested against the AIADMK which has been reeling under leadership crisis after Jayalalitha’s death in 2018. In 2018, after his father and party patriarch M Karunanidhi passed away, Stalin stepped up and held the reigns of the party. Exit polls show DMK and its allies are set to get the lion’s share in final results tomorrow.

Once a close aide to AIADMK’s Jayalalitha, TTV Dhinakaran was expelled from the party. Dhinakaran, Sasikala’s nephew, soon floated his own party Amma Makkal Munnetra Kazhagam (AMMK) and has since been fighting for political survival and has been successful so far. He won the by-elections for RK Nagar seat, months after being ousted from the party. In March 2018, he formed his own party AMMK.

According to the exit polls, E Palamiswami’s AIAMDK may not be as promising, but as Tamil Nadu chief minister managed to hold together the party after Jayalalitha’s death. While the party feared a split between two factions, it emerged from the crisis and EPS managed his grip overpower.

Badruddin Ajmal’s All India United Democratic Front (AIUDF) has managed to make its presence felt. The Congress formed an alliance with Ajmal’s party, which the BJP says is an enemy of the Assamese identity. In Assam, the AIUDF is perceived to be a party having the support of Bengali-origin Muslims from Bangladesh, who many contend pose a threat to the state’s cultural identity. Earlier, the AIUDF even claimed that “five-six BJP contestants" in the Assam polls had contacted the party promising support to the Congress-led Grand Alliance of which Badruddin Ajmal’s outfit is a constituent.

He was initially with the Congress but later joined the BJP in 2016, after being an MLA from Jalukbari from 2001 to 2015 while he was with the Congress. He was banned by the Election Commission from campaigning for 48 hours for allegedly making threatening remarks against Bodoland People’s Front chief Hagrama Mohilary. Sarma was one of the star campaigners for the BJP in Assam during the Assembly elections this year.

Known as the ‘metro man of India’ and revolutinarising India’s public transport system with metro rail services, E Sreedharan was fielded by the BJP as its chief ministerial candidate for Kerala. His candidature appeared to be an attempt to jolt things out of the Left’s control. However, the Left may return as the incumbent party in Kerala, according to poll predictions.

The exit polls have predicted a second term for the CPI (M) led Left Democratic Front (LDF) government in Kerala. The exit poll surveys point to the popularity of the Pinarayi government especially among women and youth, in implementing welfare schemes, the LDF had mostly built up its campaign along those lines.  Chief Minister Pinarayi Vijayan’s image as a crisis manager in the face of adverse situations such as floods, the Nipah virus, and the pandemic has helped the party garner support from underprivileged sections the society. However, CPM’s campaign, which entirely revolved around Vijayan had also invited criticism from many quarters. The opposition has also been relentless in its attack against the government on alleged corruption charges such as gold smuggling cases and others.