The relationship between Shiv Sena and BJP turned acrimonious over government formation in the state with the former demanding chief ministership. 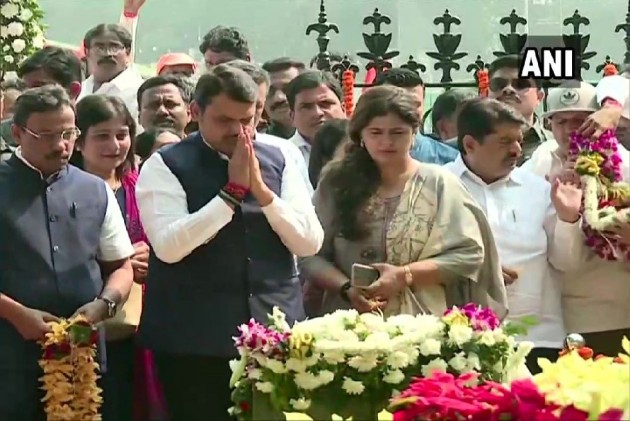 Some workers of the Shiv Sena, which recently snapped ties with the BJP, standing close to the former CM's convoy aslo shouted in Marathi Fadnavis' assembly poll campaign slogan: 'I will be back (as CM)' along with the Sena's traditional 'Chhatrapati Shivaji Maharaj ki Jai' war cry.

Apart from other party leaders, NCP chief Sharad Pawar also paid his tributes to the Bal Thackeray earlier in the day.

The slogans came in the backdrop of Maharashtra coming under the President's Rule after no party was able to muster the requisite numbers to form a government post the assembly polls this October.

The relationship between Shiv Sena and BJP turned acrimonious over government formation in the state with the former demanding chief ministership.

Both the parties who fought the polls together got an absolute majority but could not form a government due to differences over power-sharing.

The BJP emerged as the single-largest party in the state with 105 seats in 288-member assembly followed by Shiv Sena 56, NCP 54 and Congress 44.