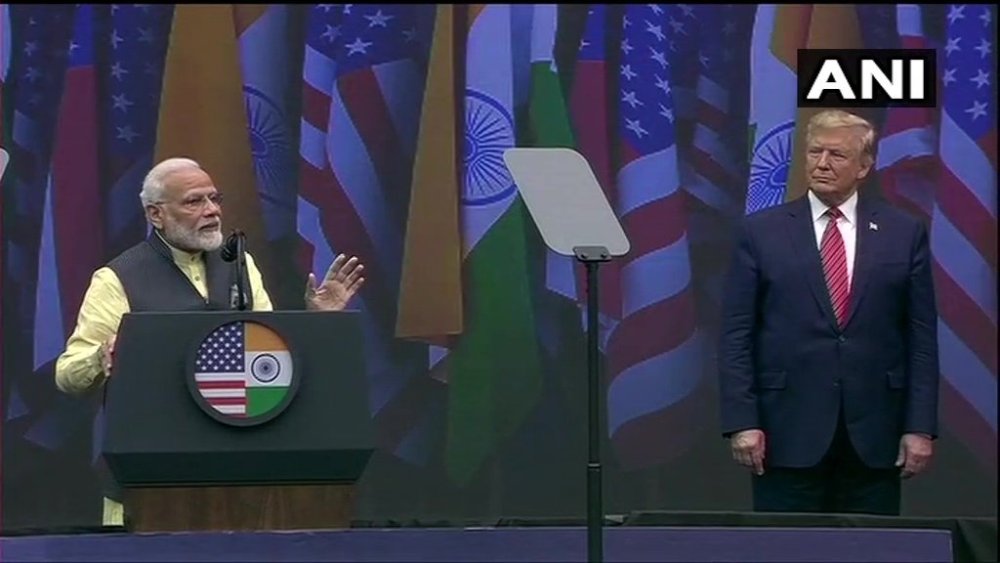 Prime Minister Narendra Modi and US President Donald Trump arrived on Sunday at the mega "Howdy, Modi" event in Houston, where the former introduced the latter to Indian-American community as a "special friend."

The prime minister said Trump needed no introduction as everyone on the planet knew him.
Modi vouched for Trump ahead of 2020 presidential polls, saying "ab ki baar Trump sarkar" - modifying the "ab ki baar Modi sarkar" slogan coined for the 2014 BJP election campaign.

Pitching for the US president he added, "We in India connected well with President Trump and with the words of candidate Trump, 'Ab ki baar Trump sarkar', rang loud and clear."

"I admire President Trump for his sense of leadership, passion for America and concern for every American," he said. "When I met him for the first time, Trump told me India has a true friend in White House."

PM Modi said Trump's name comes up in almost every conversation in the world on global politics. "He was a household name and very popular even before he went on to occupy the highest office in this great country," Modi said.

Modi is on a week-long tour to the United States where he is also going to address the United Nations General Assembly on September 27. Pakistan Prime Minister Imran Khan is also in the country and deliver a speech at the UNGA, Pakistan foreign affairs minister Mehmood Shah Qureshi said on Sunday.

Earlier, Trump arrived at the event and was received by External Affairs Minister S Jaishnakar and US Ambassador to India Kenneth Juster.

He was later greeted by Prime Minister Narendra Modi. The two leaders walked to the stage and met a group of children. With hands on each other's shoulders, the two leaders posed for a selfie on a kid's request.

The event is being organised at the sprawling NRG Football Stadium, one of the largest in the US, which has served as a venue for some of the most impressive events starring Beyonce, Metallica, to name a few.