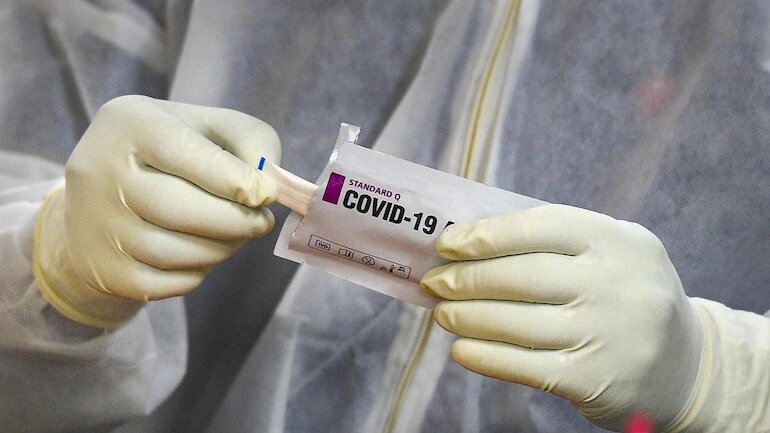 Evacuation coordinators confirmed on Tuesday that at least 10 evacuees from Afghanistan tested COVID-19 positive after their arrival at the Indira Gandhi International airport.

According to an  Indo-Tibetan Border Police (ITBP)  official,  81 people, who arrived from Afghanistan on Monday and Tuesday, have been sent to the ITBP's quarantine facility at Chhawla in south-west Delhi.

“Any person testing positive or detected as symptomatic shall be shifted to dedicated Covid Care Centre or Covid hospital of NCT of Delhi,” the memorandum read.

Kanv Bhalla, an entrepreneur coordinating rehabilitation efforts on behalf of New York-based philanthropist Mandeep Singh Sobti, said, “All 78 people, who arrived from Kabul via Dushanbe, underwent Covid-testing at the IGI airport. Of them, around 10 have tested positive.”

Sobti and Paramjeet Singh Anand through their Sobti Foundation have been making efforts to rehabilitate these distressed Afghans in coordination with the government of India, Bhalla said.

“Some people have tested positive for the infection. However, there is no clarity on their count,” said Puneet Singh Chandhok, president of the Indian World Forum, an organisation coordinating evacuation efforts with the Ministry of External Affairs and the Indian Air Force (IAF).

Sources at the LNJP Hospital said two Indian nationals, who were among the people brought to India from Afghanistan, have been admitted to its Covid ward after testing positive.

"These two patients are male and their condition is stable. They were brought to the LNJP Hospital yesterday," an official source told PTI.

Earlier in the day, 78 people, including 46 Afghan Sikhs and Hindus, flew into Delhi from Kabul via Dushanbe on an Air India flight along with three copies of Sikh scripture Guru Granth Sahib.

Union ministers Hardeep Singh Puri and V Muraleedharan received the three copies of the Sikh scripture and the batch of Afghan Sikhs at the Indira Gandhi International (IGI) Airport.

The three copies of Guru Granth Sahib will be taken to Guru Arjan Dev Ji Gurdwara in New Mahavir Nagar, according to Chandhok.

Nearly 200 more Afghan Sikhs and Hindus are still stranded in Afghanistan. These people have taken shelter at the Karte Parwan gurdwara in Kabul, which is close to the airport, he said.

According to people sheltered in the gurdwara, the 10-kilometre-long drive to the international airport through various checkpoints is one of the biggest challenges in the rescue efforts.

Around 75 more Afghan Sikhs and Hindus are likely to be evacuated soon, Chandhok added.

Till Tuesday evening, India had brought over 800 people from Afghanistan as part of the evacuation mission that began on August 16, a day after Kabul fell to the Taliban.

Thousands of Afghans have been crowding around the Kabul airport for nearly a week, in a desperate attempt to flee the country fearing the Taliban's brutality.

India is carrying out the evacuation missions in coordination with the US and several other friendly countries.