Genesis Of Agitation: Why Farmers in Haryana And Punjab Are Protesting

Farmers in Punjab and Haryana have been protesting since Thursday against three ordinances that were passed by the central government earlier this year. 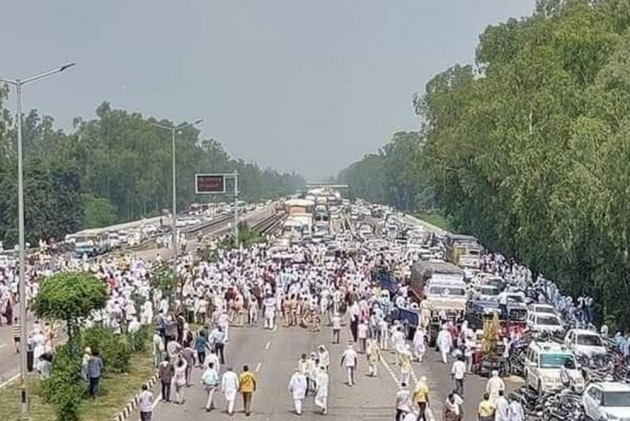 "Farmers’ protests, which grew to larger dimensions over the last few days in Haryana and Punjab, seem likely to become more widespread due to several factors", says Prabhakar Kelkar, vice president of Bharatiya Kisan Sangh, a farmers’ outfit allied to the BJP.

At the core of the discontent are the three central government ordinances that were passed earlier this year to provide farmers more alternatives to raise their income through formal contract agreements and, also to provide them with more selling avenues besides the local Agricultural Produce & Livestock Market Committee (APMC) mandis, for selling their produce.

But contrary to the stated objectives of the three ordinances; The Farmers’ Produce Trade and Commerce (Promotion and Facilitation) Ordinance, 2020, the Farmers (Empowerment and Protection) Agreement on Price Assurance and Farm Services Ordinance, 2020, and the Essential Commodities (Amendment) Ordinance, 2020, there is rising discontent both among farmers and mandi traders and workers.

The farmers' discontent, according to Kelkar, is over uncertainty of payments, which as per the new ordinance have to be made within three days. But in reality, many of the small farmers in Madhya Pradesh for instance, are facing the problem of either not finding buyers or alternatively being pressurized to bring in larger quantities.

This has made many small farmers victim to unscrupulous traders with no documents to get their grievances redressed. Unlike in APMC managed mandis, where records of transactions are maintained, there is little means to track these unregistered traders. This has led to many farmers being cheated of their dues.

In many instances, the traders and mandi workers are behind the rising agitation as opening of more sale avenues has led to mandi-based traders fear a sharp drop in their business and market influence.

In direct correlation to the drop in mandi business is the insecurity of the workers in the yards whose numbers can range anywhere between a few thousands to around 50,000 (including the casual helpers). These mandi workers fear that their avenue for wages will be hit.

In Punjab and Haryana, which are among states from where the central agencies make most purchases for the food security including the public distribution system, there is an additional fear that farmers may miss out on getting an assured price or Minimum Support Price (MSP), which is often more than the market price particularly during times of surplus.

Given the good monsoon showers this year and expectations of a bumper crop, this cannot be discounted unless the government intervenes to ensure a fair price for farmers.