'At The End of A Protest': A Poem On Farmers' Protest

The farmers' protest that went through the entire 2021 was sustained by numerous camps, tractors, and deaths. As time welcomes new dawn, a tribute to the farmers' agitation through the eyes of a poet. 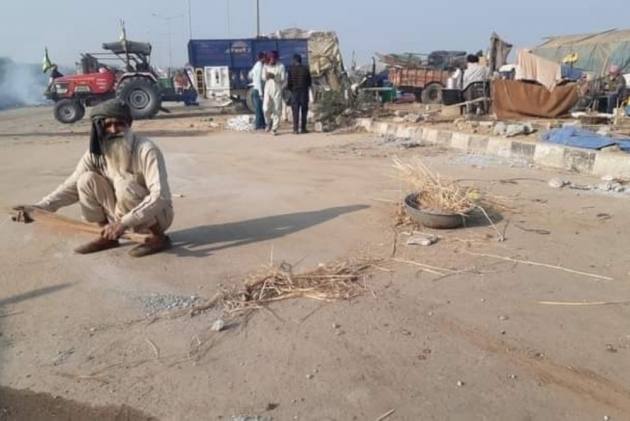 From December 2020, Indian farmers launched protests against Prime Minister Narendra Modi-ruled government over three contentious farm bills, that aimed at bringing amendments to the agricultural sector. The protest that went through the entire 2021, before it was called off in December, was sustained by numerous camps, tractors and farmers assembled at the Singhu and Tikri borders in North India. As time welcomes new dawn, a tribute to the farmers' agitation through the eyes of a poet.

still hosts the heart burning on.
A sage sits on his knees,
stoops to gather the last rites.

One handbill, torn and wet, flies
away with the word 'Wrong',
and he crumples another until
the word 'Right' remains on top
of the diamond facets.

In trucks, pick-ups, and tractors
the tired pilgrimage dissipates.
The sage lights up a crude cigarette.
Zephyr dust-fogs the details -
except the red dot burning
in and out, out and in.

(Kushal Poddar, the former editor of ‘Words Surfacing’, has authored eight books. His works have been translated into eleven languages.)