As devotees and visitors take the scorpion in their hands tentatively, a man tells them not to worry as the "powers" of Sufi saint Shah Wilayat, popularly known as Dada Shah Wilayat, are at work. 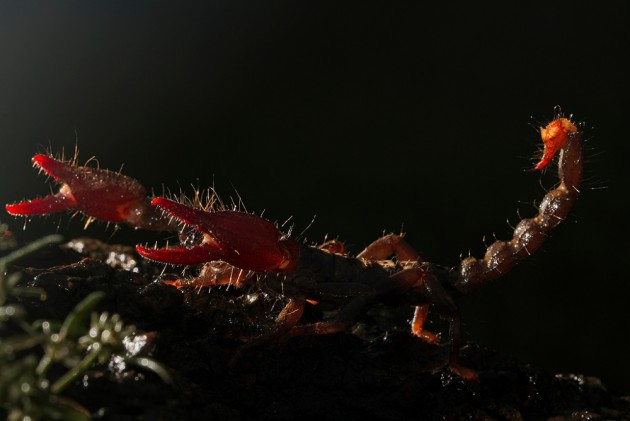 The bitterly fought election campaign might have a sting but scorpions in a dargah here don't – not even when you pick them up.

Syed Sharfuddin Shah Wilayat's dargah in western Uttar Pradesh's Amroha is where long-held beliefs in the power of miracles meet everyday rationality. And where the lines of what you know and what you see sometimes begin to blur.

Locals say the dargah (shrine) is the everyday miracle of poisonous scorpions that don't sting.

The town is still gripped with election fever even after the voting in Amroha on April 18, with people endlessly discussing the outcome. The main contenders here are BJP's sitting MP Kanwar Singh Tanwar, BSP's Danish Ali and the Congress' Sachin Chaudhary.

However, in the midst of it all, locals don't forget to tell visitors about the "must-see" shrine.

They swear by the "magical powers" of the Sufi saint who is believed to have said scorpions will not sting inside the premises of the place he lived in after arriving in Amroha in the 13th century.

Since then, scorpions, no matter how poisonous, brought from any part of the world, have not stung anyone inside the premises of the dargah, according to popularly held belief.

What's more, you can not only hold the scorpions in your hand, but also take them home with the "permission of the Sufi saint".

"But there is a catch. You have to state when will you bring back the scorpion. Till that deadline, the scorpion will not sting you. But if that deadline exceeds even by a minute, the deadly creature will sting," said Anis Ahmed, a 'khadim' who serves at the dargah like generations of his family before him.

Next to the Sufi saint's grave, a man sits with a green box containing a deadly black scorpion.

As devotees and visitors take the scorpion in their hands tentatively, the man tells them not to worry as the "powers" of Sufi saint Shah Wilayat, popularly known as Dada Shah Wilayat, are at work.

The scorpion doesn't sting as promised. And children, men, women and senior citizens get photographs clicked to capture the moment that seems straight out of the reality show "Fear Factor".

Many scorpions are found in and around the dargah. If someone takes the one in the green box home, it is immediately replaced.

Narrating the folklore around the dargah, Ahmed said when Shah Wilayat arrived in Amroha from Iraq in 1272 A.D there was another Sufi mystic in the village called Shah Nasruddin who asked him to go elsewhere as they were a number of mystics already staying here.

Shah Nasruddin told Shah Wilayat the many scorpions and snakes in the area would not let him stay.

"Then Shah Wilayat replied, at my place they will not sting. Since then they don't sting. It is a miracle. You can get a poisonous scorpion from outside, but when it will come here, it will not sting," the dargah 'khadim' recounted.

Endorsing the belief, Mohammad Arshad, a lawyer who comes regularly to the dargah, said his family has been visiting the shrine for generations and the story is "100 per cent true".

Abdul Qayyum, another devotee, said he has lived in the dargah for the last 30 years. Not once has a scorpion stung anybody in the premises. And nor has the deadly creature stung if a person has taken it home.

"People have always brought back the scorpion before deadline," he said.

Not all subscribe to the story. Though in a minority, there are sceptics in the area.

Hasan Askari, a businessman and keen observer of cultural developments around Amroha, said such folklores are carried by word of mouth through generations.

"It is claimed the scorpions don't sting. Probably they (those at the dargah) may have been taking out the poison. Probably the saint knew how to handle scorpions so they don't sting and the legend was built on that. But one thing is true, this has been a very widely held belief in Amroha since ages," he said.

The popular belief about Shah Nasruddin's shrine a few kilometres away is that missing donkeys or horses will make their way there. The owner should come to that dargah and will find them there.

Hasan Mohammad Abidi, the caretaker of that dargah, said, "I've been here for the last six-seven years and I have seen myself that people have found their donkeys and horses here. Another miracle is that the horses and donkeys do not excrete while in the premises of the dargah."

A twist in the 'tail' – even one that doesn't have a sting.