ATS on Tuesday said suspended police officer Sachin Vaze was the prime accused in the Mansukh Hiran murder case, adding it will approach the special NIA court here to get his custody. 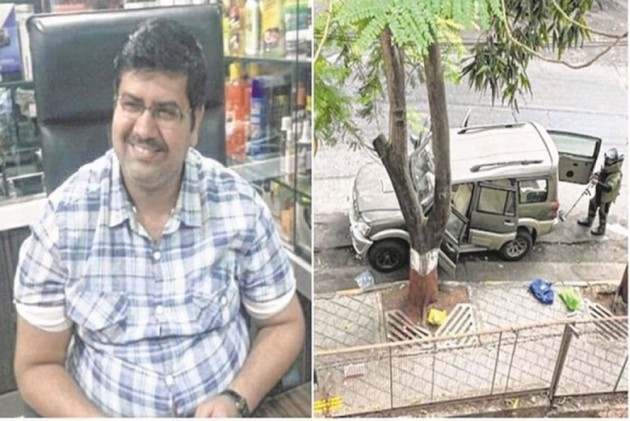 More arrests were likely in the case, said Singh.

Vaze, arrested in connection with the recovery of explosives-laden SUV near industrialist Mukesh Ambani's residence in south Mumbai, is currently in the custody of the National Investigation Agency (NIA) till March 25.

"After the arrest of both these men, ATS found Vaze is a prime accused in the case and played a vital role," the ATS chief told reporters.

"We need his custody and will approach the court on March 25," Singh added.

Vaze's statement was recorded in the Hiran case on March 8 when he flatly denied any role in the crime, but the probe revealed that he was lying, the ATS chief said.

Fadnavis, who met the Union home secretary in Delhi, also claimed that the MVA government in the state has not acted on an "incriminating" state intelligence department report containing audio intercepts of large-scale corruption in police transfers and postings.

"The Union home secretary told me that they will verify documents and evidence submitted and a report will be sent to the Central government, which will take appropriate action," Fadnavis told reporters.

"As per police records of VIP movement, Anil Deshmukh went to Sahyadri Guest House in Mumbai on February 17 and Mantralaya on February 24," said Fadnavis, who is also the leader of Opposition in the state Assembly.

"Deshmukh was in home quarantine from February 15-27 but met officers and was not in isolation. I feel Pawar Sahab was not briefed properly yesterday," the BJP leader said.

Pawar had on Monday told reporters that Deshmukh was recuperating from COVID-19 infection during the period former police commissioner Param Bir Singh has claimed that he was indulging in "extortion activities" through police officers.

Fadnavis claimed the Maha Vikas Agadi (MVA) government in the state did not act on a state intelligence department report containing audio intercepts of "large scale corruption" in police transfers and postings, and said he would seek a probe by the CBI.

Fadnavis said he had 6.3 GB data of calls intercepted by then Commissioner of Intelligence Rashmi Shukla with due permissions, where names of several key police officers were discussed.

These phone calls were recorded by Shukla with due permission from the state government but despite submission of the report to Chief Minister Uddhav Thackeray in August, 2020, no action was taken on the report, the BJP leader said.

"I am demanding a CBI probe in this matter," he added.

Hitting back at Fadnavis, the NCP, a constituent in the Shiv Sena-led state government, said he was misguiding people.

NCP spokesperson and state minister Nawab Malik rejected Fadnavis' claims terming them as "another attempt to bring down the MVA government".

"The BJP cannot live without power. But they will not able to topple this government like in Madhya Pradesh, Karnataka and some other states. BJP's state leadership is seeking the Centre's help to malign the image of the MVA government and to bring it down," he said.

Malik accused Fadnavis of "lying and misguiding" people over the contents of Shukla's report.

"The MVA government enjoys a comfortable majority in the Assembly. Nobody can destabilise it," he said.

To a query on the "6.3 GB data" which Fadnavis claimed to be in possession, Malik said, "The BJP seems to be more concerned about data than 'aata' (food for poor). This information given by Fadnavis is part of a larger conspiracy. He has been exposed completely".