Attired In Pink, Priyanka Sena To Help Priyanka Gandhi Vadra In UP Roadshow

Priyanka's roadshow is expected to shore up the Congress’ fate in the politically crucial state of Uttar Pradesh that sends 80 members to the Lok Sabha. 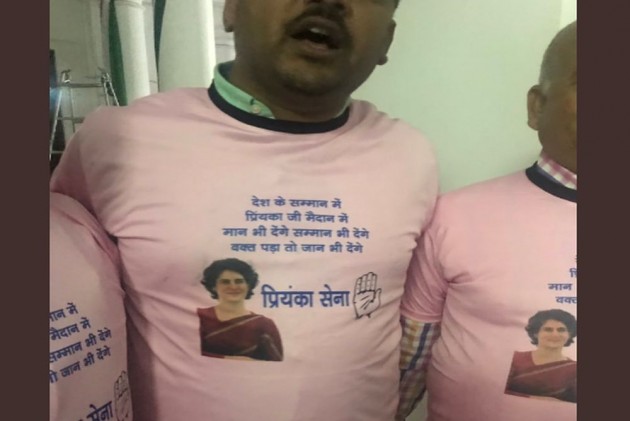 As Priyanka Gandhi Vadra launched her first roadshow in Lucknow on Monday after being appointed Congress general secretary in charge of eastern Uttar Pradesh, she had the 'Priyanka Sena', a dedicated army of party workers to help her -- all attired in pink.

Priyanka's roadshow is expected to shore up the Congress’ fate in the politically crucial state of Uttar Pradesh that sends 80 members to the Lok Sabha.

The members of the Priyanka Sena wear pink T shirts, pledging to even lay down their lives for the country.

“Desh ke samman mein, Priyanka ji maidan mein, Maan bhi denge, samman bhi denge, waqt padega toh jaan bhi denge (To honour the country, with Priyanka Gandhi in the field, we will give our respect and if required we will even lay down our lives),” says the slogan on the pink T-shirts, which has a photo of the Congress leader too.

“With the Priyanka Sena at the Nehru Bhawan, Lucknow. It’s almost like a celebration here,” tweeted Sushmita Dev, president of the Congress party’s women’s wing, ahead of the visit.

With the Priyanka Sena at the Nehru Bhawan, Luckhnow. It’s almost like a celebration here. pic.twitter.com/GuFuEswY4V

Ahead of her visit to Lucknow, Priyanka Gandhi in an audio message on the Congress' Shakti App, said: “I am coming tomorrow to Lucknow to meet all of you. I have hope in my heart that together we will start a new kind of politics, a politics in which all of you will be stakeholders.”

“My young friends, my sisters and even the weakest person, all their voices will be heard. Come, let’s build a new future, new politics with me. Thank you,” she said.

Priyanka Gandhi along with her brother, Congress president Rahul Gandhi, and party leader Jyotiraditya Scindia will be in Uttar Pradesh for the roadshow. Rahul Gandhi will return on the same day, while Priyanka Gandhi and Jyotiraditya Scindia will interact with party workers on February 12, 13 and 14 to meet with office bearers and party leaders to chalk out a strategy for the upcoming general elections.

Scindia, who has been given the responsibility of western UP, also shared a similar audio message.

Priyanka Gandhi's much-awaited political plunge has created a lot of buzz within the party as well as in the rival camps and the party has made hectic preparations for the visit.

She was appointed a Congress general secretary last month, a move that ended years of speculation over her induction into the party.

Home to 80 Lok Sabha seats, Uttar Pradesh sends the highest number of MPs to Parliament, making it a key electoral battleground. The ruling Bharatiya Janata Party faces a challenge here from the Samajwadi Party-Bahujan Samaj Party alliance, while the Congress is trying hard to retrieve lost ground in the state.