The decision to withdraw the invitation to Sahgal (91), who was earlier at the forefront of the "award wapsi" campaign, was taken after a political outfit threatened to disrupt the function, the organisers said on Sunday. 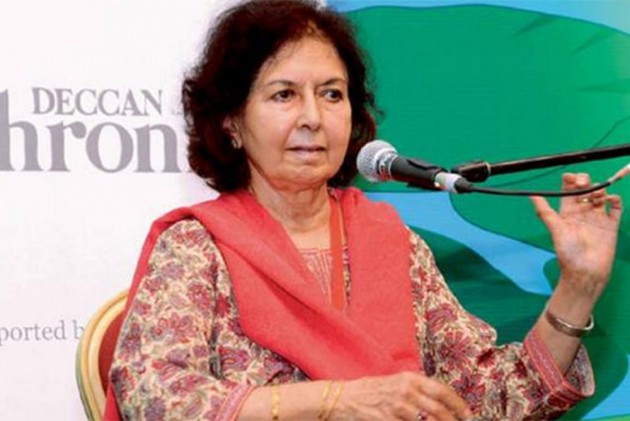 The decision of the organisers of the All India Marathi Literary Meet to withdraw the invitation extended to noted author Nayantara Sahgal is being condemned on Monday by political leaders across parties and authors.

The decision to withdraw the invitation to Sahgal (91), who was earlier at the forefront of the "award wapsi" campaign, was taken after a political outfit threatened to disrupt the function, the organisers said on Sunday.

Maharashtra Navnirman Sena (MNS) chief Raj Thackeray issued a statement on Monday, admitting that one of his local party workers had opposed Sahgal's presence at the literary meet. However, he added that "as the party chief, I am not against inviting her".

"If Sahgal's presence at the All India Literary Meet is transcending into a cultural exchange, I or my party will not oppose it," Thackeray said, adding that he regretted the annoyance caused to the supporters of such literary events.

Sahgal, a noted English-language author, was to inaugurate the 92nd literary meet on January 11 in the presence of Maharashtra Chief Minister Devendra Fadnavis in Yavatmal district.

Mumbai Congress chief Sanjay Nirupam criticised the decision to cancel Sahgal's invitation, alleging that it was done at the behest of the ruling Bharatiya Janata Party (BJP).

"The decision of the organisers was taken at the behest of the BJP, the MNS is just a front. Literature should not surrender before politics. If a government is scared of writers, it means that its days are over," he said.

"If someone had opposed Sahgal after her speech at the meet, then it could have been understood. It is not fair to oppose her completely. Maharashtra is a state that welcomes everyone to present their work," he said.

Noted Marathi author Aruna Dhere, who will preside over the event, also criticised the organisers for cancelling Sahgal's invitation.

"It is shocking that you respectfully invite someone and later back out. She should be invited with utmost respect," she said.

Laxmikant Deshmukh, the outgoing chairman of the literary meet, said the organisers should have thought before inviting Sahgal, as her line of thinking was well-known.

"Inviting her at the first place and then backing out is a cover-up," he said, without elaborating further.

Marathi author Sanjay Awate said he would boycott the literary meet as a mark of protest.

In a press release issued on Sunday, the working president of the literary meet's reception committee, Ramakant Kolte, said the organisers had decided to revoke Sahgal's invitation, "as a controversy has cropped up against her name and to avoid any untoward incident from those who threatened to derail the literary meet".