Awaiting Instructions From Central Leadership To Form Govt In Karnataka: B S Yeddyurappa

BJP Parliamentary Board is expected to meet in Delhi on Wednesday to give a go-ahead to Yeddyurappa regarding government formation. 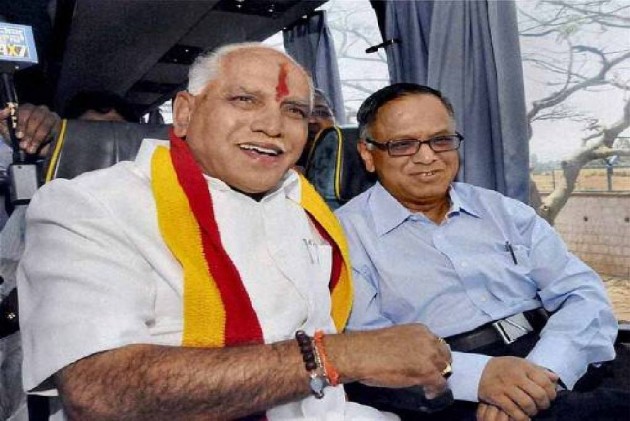 Karnataka BJP President B S Yeddyurappa Wednesday said he was awaiting instructions from his party central leadership on staking claim to form an alternative government in the state.

The 14-month old Congress-JDS coalition government headed by H D Kumaraswamy collapsed on Tuesday after losing the vote of confidence in the assembly in a climax to a three-week-long intense power struggle.

"I'm awaiting instructions from Delhi. I can call legislature party meeting any time and go to Raj Bhavan (to stake claim). I'm waiting for it," Yeddyurappa told reporters after meeting RSS leaders at its state headquarters "Keshava Krupa" in Bengaluru.

Noting that it was because of the blessings and cooperation of Rashtriya Swayamsevak Sangh, he has grown from taluk to state level to become Chief Minister, he said, "I have come here to take blessings from elders of Sangh Parivar before taking next step."

BJP Parliamentary Board is expected to meet in Delhi on Wednesday to give a go-ahead to Yeddyurappa regarding government formation.

Senior BJP legislator J C Madhuswamy said, "party national president Amit Shah has to instruct us to call a legislature party meeting in the presence of an observer to elect the leader."

He said, "things have to go democratically as ours is a national party, so we are waiting for instructions from them after that appointment with Governor will be sought."

In the trial of legislative strength, Kumaraswamy had garnered 99 votes against the 105 by the BJP.