The mosque is coming up in the Uttar Pradesh district pursuant to the Supreme Court verdict in the Ram Janmabhoomi case. 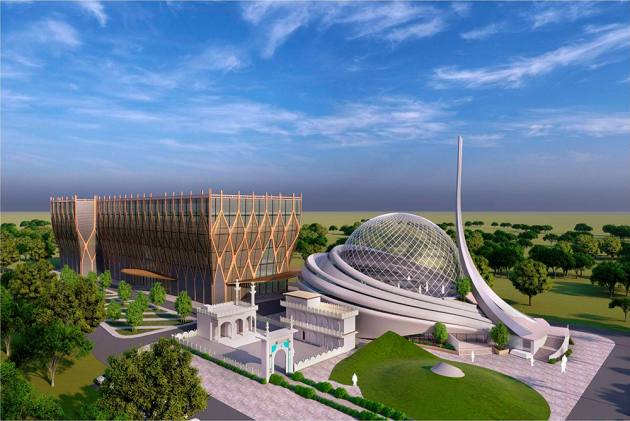 Construction work for the Dhannipur mosque project in Uttar Pradesh’s Ayodhya will begin on Republic Day after a flag hoisting ceremony, the Trust constituted to build the mosque announced on Sunday.

Apart from a mosque, a museum, a library, a community kitchen, the Indo-Islamic Cultural Research Centre and a publication house will also be constructed on the five acre plot allotted by the Supreme Court.

The mosque will be built on 15,000 square feet and it will be the same size as that of the demolished Babri mosque. The mosque is likely to have a unique, square design, similar to that of the Kaaba in Mecca.

The mosque is coming up in the Uttar Pradesh district pursuant to the Supreme Court verdict in the Ram Janmabhoomi case.

"At a meeting of the Indo-Islamic Cultural Foundation (IICF), it was decided that Republic Day will be celebrated with the start of the Dhannipur Mosque Project, which includes a hospital, a museum, a library, a community kitchen, the Indo-Islamic Cultural Research Centre, a publication house and a mosque, secretary and spokesperson of the Trust Athar Hussain said in a statement on Sunday.

He said at 8.30 am on January 26, the national flag will be hoisted on the five-acre plot of the project, which will be followed by plantation of tree saplings by the chief trustee and the member trustees of the IICF.

At a virtual meet chaired by IICF president Zufar Ahmad Farooqi and attended by all the nine trustees, the progress of the trust activities, especially the procedural delay in getting the 12-A/80-G clearances under the Income-Tax Act and the proceedings for the opening of an FCRA account, was discussed, the statement noted.

"It was decided to make a formal beginning of the project by applying for the plan clearance from the Ayodhya District Board and start the soil testing process at the five-acre plot," it added.

As the focus of the project is to give community service in the area with a determined effort to create awareness on climate change, Hussain proposed that the formal start of the project should be made by planting tree saplings on the five-acre plot of land.

As envisaged in the project, a green area, which will have plants from all over the world -- from the Amazon rainforest to areas in Australia that report bushfires -- and from all different geographical regions of India will be developed to create awareness on the imminent threat posed by climate change.

The Uttar Pradesh Sunni Central Waqf Board has formed the IICF, a trust, for the construction of the mosque on the five-acre plot.

The state government has allotted the plot in Dhannipur for the construction of the mosque on the directions of the Supreme Court.

After a protracted legal tussle, the apex court on November 9, 2019 ruled in favour of the construction of a Ram temple at a disputed site in Ayodhya and directed the Centre to allot an alternative five-acre plot to the Sunni Waqf Board for building a new mosque at a "prominent" place in the holy town in Uttar Pradesh.

The Babri mosque in Ayodhya was demolished on December 6, 1992 by "karsevaks", who claimed that an ancient Ram temple stood at the same site.