Alleging that the BSP was ignoring its founder, Kanshi Ram's ideals, Chandra Shekhar Aazad claimed that the Mayawati-led party has lost its identity 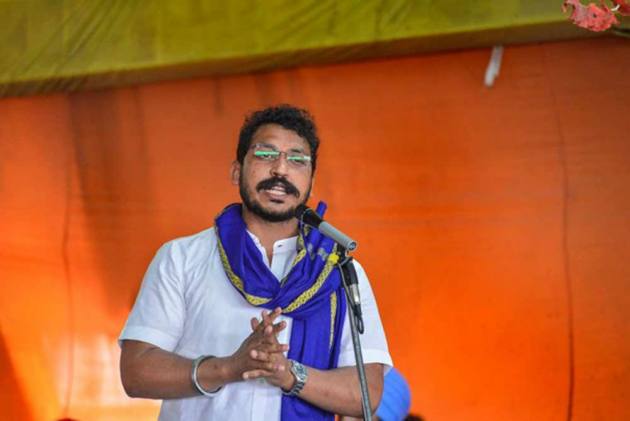 Accusing the Bahujan Samaj Party of going soft on the Centre for the fear of central probe agencies, Azad Samaj Party chief Chandra Shekhar Aazad on Sunday pitched his new political outfit as an alternative to the Mayawati-led party which he said was losing its identity by working against the principles of its founder Kanshi Ram.

The Bhim Army chief, whose political outfit Azad Samaj Party launched last year, is seeking to establish itself as a defender of the rights of Dalits, other backward classes and minorities, said a "grand alliance" is the need of the hour for the Uttar Pradesh Assembly polls next year and all those who are serious about stopping the Bharatiya Janata Party (BJP) from coming back to power must join hands.

In an interview with PTI, Aazad said he has no qualms in aligning with anybody, including the Bahujan Samaj Party (BSP), provided the objective is to forge a strong alliance to defeat the Yogi Adityanath government which he alleged was running a "dictatorial" administration.

"We are in talks with all (opposition) parties. When any problem confronts the state and the country all parties discuss matters. In our party, the core committee is the supreme body and it will take a call on alliances," the Azad Samaj Party chief said, adding that his party has not formalised any tie-ups as of now for the assembly polls.

"Our efforts are directed at forging a grand alliance to take on the BJP for the sake of the people. This misrule must come to an end. So, a grand alliance should be formed to stop the BJP," the 34-year-old leader stressed.

Calling for a common minimum programme, he batted for having a coalition government in UP, saying when parties get a hold over power alone then dictatorial situations arise "as it is happening now".

Asked about the barbs directed at him by BSP chief Mayawati, he said if someone criticises him, he is not perturbed by it. "I am not scared of criticism and allegations," Aazad said.

However, Aazad was also scathing in his criticism of the Mayawati-led party, while adding that his differences with it were ideological and not personal.

"Look at other states, now they (BSP) are getting less than 1 per cent votes, be it in Kerala, Assam, West Bengal. The BSP is in decline because its leaders don't want to work on the ground level and only go to the people during elections and the people are understanding this," he claimed.

Alleging that the BSP was ignoring its founder the late Kanshi Ram's ideals, Aazad alleged that the Mayawati-led party was working against those principles.

"We have given an alternative to the people and showed our mettle with our work on the ground. We pledge to be with people before and after elections," the Azad Samaj Party chief said.

He also accused the BSP of going soft on the Centre on various issues for the fear of central probe agencies.

"When you have cases of CBI (Central Bureau of Investigation), ED (Enforcement Directorate), you are caught in the stranglehold of the Centre and you cannot put forward your views strongly," Aazad said.

"There are several such cases (on Mayawati) and also her brother," he alleged, while asserting that his party was playing the role of a responsible opposition despite being just over a year old.

Asked about the Congress as a potential ally in UP, Aazad said there was no rift with the party but his outfit was raising its voice wherever deprived were wronged and did so recently in Congress-ruled Rajasthan.

"I don't have a personal problem (with the Congress). All those who believe that the BJP must be stopped and that it has harmed the state, they must come together," he asserted.

In the run up to the UP assembly polls next year, Aazad is leading a 'Bahujan Cycle Yatra' with the slogan 'Jaati Chorho Samaj Jodo' from July 1-21, seeking to "counter the communal atmosphere in the country and for uniting people".

"The BJP works on the policy of divide and rule. We work on the politics of brotherhood and equality. Caste divisions create animosity between the people and because of this the country has lagged behind in development," he said.

The message of this rally is to break caste barriers and establish brotherhood, Aazad said.

He accused the UP government of undermining reservation in appointments and carrying out "recruitment scams". He also alleged that there was a major issue of inflation and the declining law and order situation in the state, with kidnappings of traders becoming a norm and women and sisters not safe.

Aazad also hit out at the Yogi government over the violence during the filing of nominations in block pramukh polls, alleging that democracy was being "abducted" in the state.