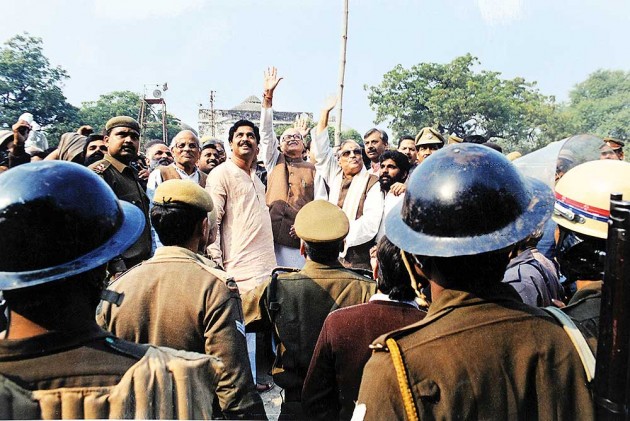 The 1992 demolition  which was preceded by a series of rath yatras by the BJP's senior leader LK Advani had cost around 3,000 lives and changed the country's political landscape.

CBI judge SK Yadav, had directed all 32 accused to be present during the proceedings on Wednesday.

The 32 accused in the case of Babri demolition, including senior leaders L.K. Advani, Murli Manohar Joshi, Kalyan Singh, Uma Bharti, Vinay Katiyar, Sakshi Maharaj, Sadhvi Rit Ambhara (VHP Leader), Champat Rai (general secretary of Sri Ram Janmabhoomi Tirath Kshetra Trust that is overseeing construction of the Ram temple) and Mahant Nritya Gopal Das (Chairman of the trust), had been asked to be present in Lucknow when the court is to declare its verdict on the charges of criminal conspiracy against them.

CBI judge SK Yadav, had directed all 32 accused to be present during the proceedings on Wednesday.

However, the four high-profile accused which include LK Advani, MM Joshi, Uma Bharti, Kalyan Singh are unlikely to be present in court at time of delivery of verdict in Babri case.

Mr Advani, 92, and Mr Joshi, 86, are exempted from attending on health grounds. Uma Bharti has contracted coronavirus and Kalyan Singh is recuperating from it.