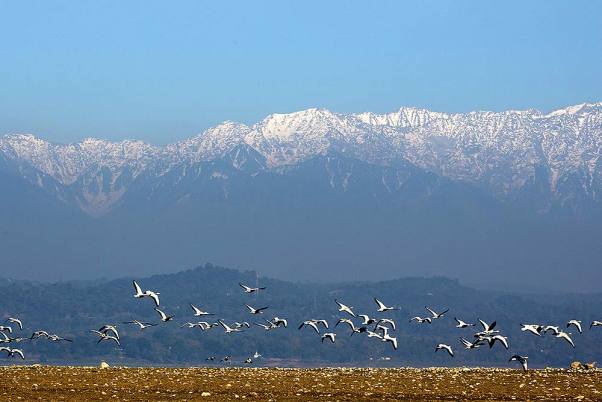 With the mystery deepening over the death of hundreds of migratory birds at Pong Dam lake, a famous international wetland site, the Himachal Pradesh government on Saturday imposed a complete ban on all tourism activities in the 10km area of the dam with immediate effect.

There will be no human activity permitted in the 10km periphery of the lake. Villagers have been asked not to graze cattle in the area.

The forests and wildlife experts are suspecting the outbreak of some disease or some infection having travelled to the lake with the migratory birds from several places of Central Asia, Siberia, Mongolia and Tibet.

How Did 400 Winged Guests Die At Pong Dam In Himachal? Probe On

An initial investigation had ruled out poisoning of the birds.

The orders were issued by Kangra district magistrate-cum-deputy commissioner Rakesh Parajapati on the advice of the principal chief conservator of forests (wildlife) Archana Sharma, who is also state wildlife warden.

In his order the deputy commissioner said, “I am convinced that there is a real and imminent threat to the lives of citizens living near Pong Dam reservoir, particularly due to recent deaths of the migratory birds. Possible danger to the lives of people and animals cannot be ruled out if certain restrictions are not imposed.” 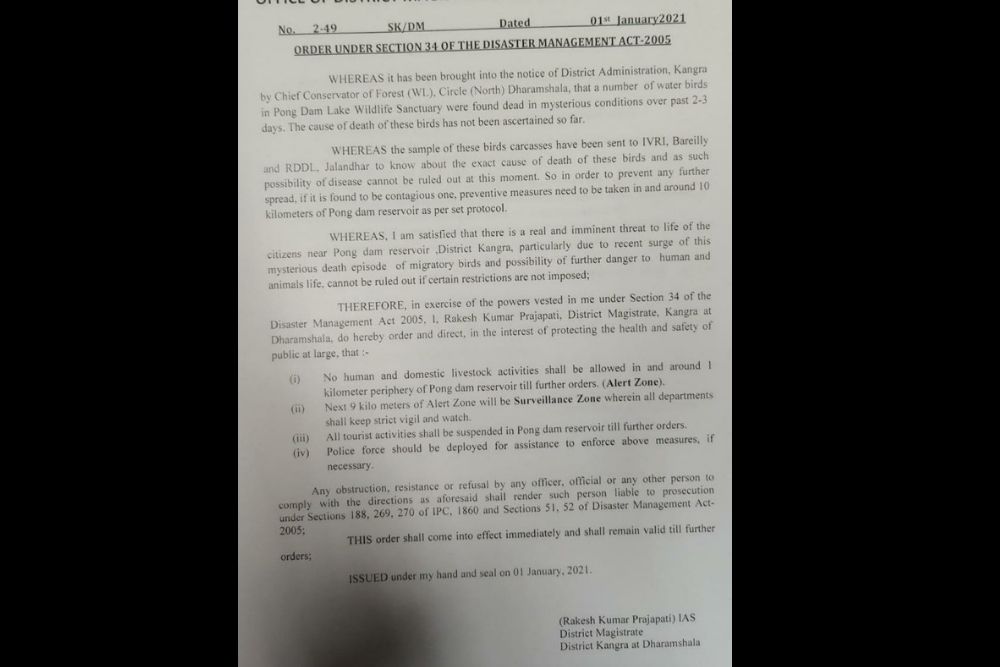 Copy of the issued letter

The administration has put the toll at 1,200, most of them bar-headed geese and common teal.

“This is perhaps the highest number of birds dying at the lake ever and the development has really shocked everyone,” he said.

According to the orders of the district magistrate, the entire 10km area surrounding the lake, about 9km has been declared as a surveillance zone and the 1km inner area will be an alert zone.

The police have also been deployed to keep a check on human and cattle movement. Tourists will not be permitted to come closer to the banned area.

Till now the viscera samples of the birds have been sent to Regional Disease Diagnostic Laboratory (RDDL) Jalandhar and Government Veterinary College in Palampur.

In addition to this, nearly 40 samples have also been sent to the Indian Veterinary Research Institute (IVRI), Bareilly, and Wildlife Institute of India, Dehradun.

Till now, more than 50,000 winter guests (migratory birds) have reached the lake this season.

“The death of migratory birds is unfortunate and a matter of concern. The wildlife department officials have been directed to ascertain the reasons for the death of the migratory birds at the earliest. The higher-ranked officials have been visiting the affected sites to gather the evidence but till we get the reports from the labs, nothing can be said,” said Himachal Pradesh forest and wildlife minister Rakesh Pathania.

“Such a large number of birds dying at the lake is really unfortunate and tragic. Reasons must be found at the earliest so that some remedial steps can be taken,” Kangra said.

Also known as Maharana Pratap Sagar – a large manmade lake – was created by building the highest earthfill dam on the Beas river in 1975 in Kangra district. The town of Gopipur was inundated as a result and hundreds of families were displaced. The lake is part of a wildlife sanctuary and a Ramsar site. The reservoir covers an area of 24,529 hectares and the wetlands are spread over 15,662 hectares, wildlife officials said.