This year, the country’s flagship puja organising forum has decided to not observe 'deepavali' (festival of lights) during Kali Puja. 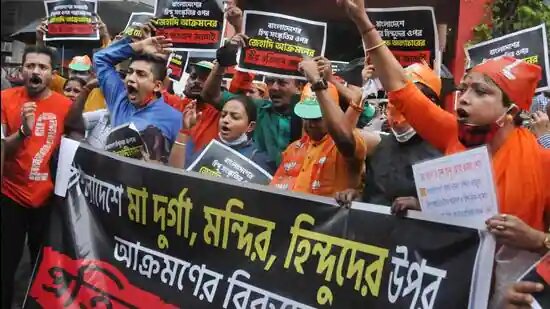 Every year on Kali Puja, a thousand earthen lamps, shahasra pradeep, are lit in the iconic Dhakeshwari temple, a ‘national temple’ in Bangladesh. But this year the country’s flagship puja organising forum has decided to observe a ‘dark Kali Puja’ in protest against the recent countrywide violence targeting Hindus, Durga Puja pandals, temples and other properties following rumours of insult to Islam. On November 4, the night of Kali Puja, no lamps will be lit at Dhakeshwari temple. There will be no firecrackers either.

“We have decided that no deepavali (festival of lights) will be observed during this Kali Puja. Depending on their security arrangements, organisers can perform the puja with idols or even without them, using the ghowt (small earthen pot with water, leaves and flowers) instead. But no lamps will be lit, earthen or electrical,” Milan Kanti Dutta, president of Bangladesh Puja Udjapan Parishad, told Outlook over phone from Dhaka on Saturday. At pandals, temples and homes, halogen lamps etc can be used for security purposes, but there won’t be any light for decoration, the forum had announced on Friday.

Besides Durga, Kali is one of the most significant deities for Bengali Hindus living in West Bengal, Bangladesh, Tripura and Assam, as also in other parts of the world. Kali Puja is their biggest religious festival after Durga Puja. Members of the forum said about 30,000 Kali Pujas, including those in temples and community pujas, will be organised this year. The number of Durga Pujas this year was 32,118.

Biplab De, office secretary of the forum, says usually more Kali Pujas are organised in Bangladesh than Durga Pujas. But this year, due to the unusual atmosphere, the number has come down. “There is no meaning in keeping an idol if we can’t protect it. We have realised that we cannot organise pujas depending on the administration. So, where the organisers have the ability to protect the idol, they can go ahead with worshiping it. Otherwise, we suggest worshipping the ghowt,” says De.

At all puja pandals and temples, a silent demonstration will be held between 6 pm and 6.15 pm, when devotees will sit covering their mouth with black cloth. Black banners will be put up at every pandal and temple with ‘Samprodayikotar Biruddhe Rukhe Dnarao’ (resist communalism) written on them.

Meanwhile, the country’s minority organisations and civil society members continued to protest the week-long violence, demanding strong action from the government against the culprits. On Saturday morning, several thousand people from different religions attended a six-hour sit-in demonstration at Shahbag in Dhaka at the call of Bangladesh Hindu Buddhist Christian Unity Council, an umbrella of religious minorities. Twenty-two organisations, prominent civil society members and some public representatives took part. They demanded government action to ensure protection of the religious minorities in Bangladesh. Similar programmes took place in other parts of the country as well.