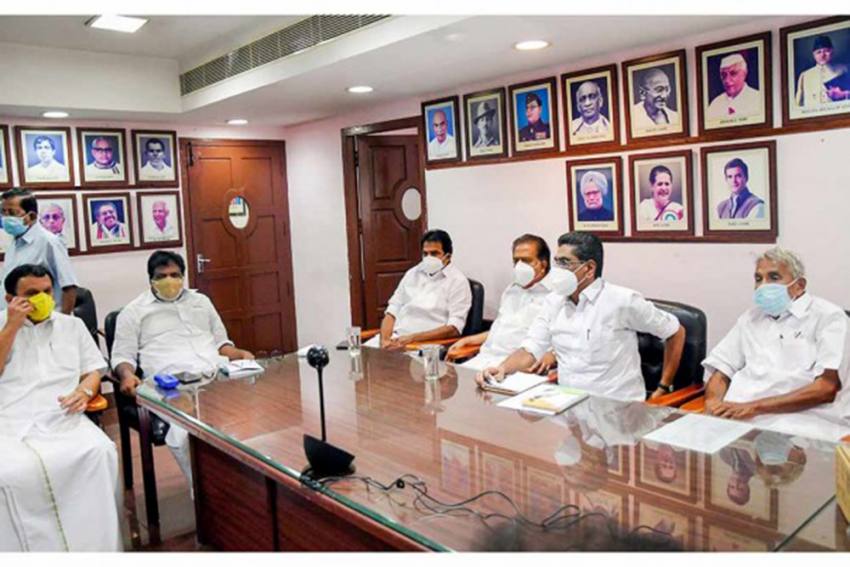 The stalemate over the appointment of the new president of Kerala Pradesh Congress Committee (KPCC) continues even after a five-member Committee submitting its report to Congress President Sonia Gandhi early this week. The fact-finding committee, headed by former Maharashtra Chief Minister Ashok Chavan was set up to study the reasons behind Congress’s electoral defeat in the recent Assembly elections in five states and to formulate revival strategies for the party.

According to sources, the Chavan committee cited the weak organizational structure and deep fissures in party ranks as the main factor behind its drubbing in the Assembly polls. The committee also called for a total revamp of the state unit. In its report, the committee alludes to the shifting away of its core minority vote bank – Christians and Muslims, from the party as one of the main reasons for the debacle, say senior leaders.

While senior leaders K Sudhakaran, Kodikkunnil Suresh, and P T Thomas are front runners for the KPCC chief post, it is learned that the High Command is buying time to reach a consensus among the factional groups to avoid further rift in the party.

Among the three contenders, the majority of AICC leaders favor K Sudhakaran the post, say sources. Dalit leader Kodikkunnil Suresh’s name has also been weighed in by the AICC. If appointed, Suresh will become the first Dalit PCC chief in the state. However, the High Command is treading cautiously after selecting V D Satheesan as leader of the opposition (LOP) recently, says a leader. It has unsettled group equations and earned displeasure of prominent ‘A and I’ factions of the state unit

The High Command’s appointment of Satheesan overruling formidable group leaders is interpreted as an effort to end the rampant group politics in the state unit. While the ‘A group is headed by former Chief Minister Oommen Chandy, ‘I camp is led by former opposition leader Ramesh Chennithala.

The move was also seen as senior leader Rahul Gandhi’s push for a generational shift in the state unit. However, both the A and I factions felt let down as both camps were lobbying for Chennithala to continue in the post. An upset ‘Chennithala’ also wrote to Congress President Sonia Gandhi about the unceremonious manner in which he was replaced by Satheesan. An AICC functionary said that some senior leaders are also unhappy that Chennithala, a four-time MP and five-term MLA, was kept in the dark about his removal from the post. The leaders are keen that such a scenario shouldn’t be repeated in the selection of the KPCC chief.

Even within the state unit, there is a clamor for considering Sudhakaran at the helm after incumbent president Mullappally Ramachandran expressed willingness to quit last week. In a report submitted to the AICC, Ramachandran had also pointed out that he was unable to perform because of the immense pressure from factional groups.

A large section of party leaders believes that Sudhakaran, who hails from Kannur can take on Chief Minister Pinarayi Vijayan and CPM, in its bastion. Sources say that Sudhakaran who is known for his aggressive style of functioning enjoys the support of AICC general secretary K C Venugopal. However, his rivals within the party feel that Sudhakaran's aggressive stance may backfire and alienate the party from people.

Sources said that though K C Venugopal is pushing for  Sudhakaran’, there is disquiet among various factions regarding his candidature.  Last week, a KPCC meeting held in the state capital witnessed ugly scenes after members of different groups clashed outside party headquarters.

The strategic silence of Oommen Chandy and Ramesh Chemmithala is intriguing as both have strong reservations against Sudhakaran’s candidature , said a leader. Both Chandy and Chennithala are in favor of Kodikunnil Suresh, according to a state leader. Critics also point out that 75- year old Sudhakran’s candidature won’t be in sync with the party’s ambition of a generational change.

Political commentators also say that though the party is attempting to end the menace of group politics, it seems that another power center led by KC Venugopal has now emerged to compete with the others. This may not augur well for the party, which is preparing to recalibrate itself ahead of the 2024 Lok Sabha polls, says another senior leader.