Tathagata Roy vs Dilip Ghosh: Another Headache For BJP In West Bengal? 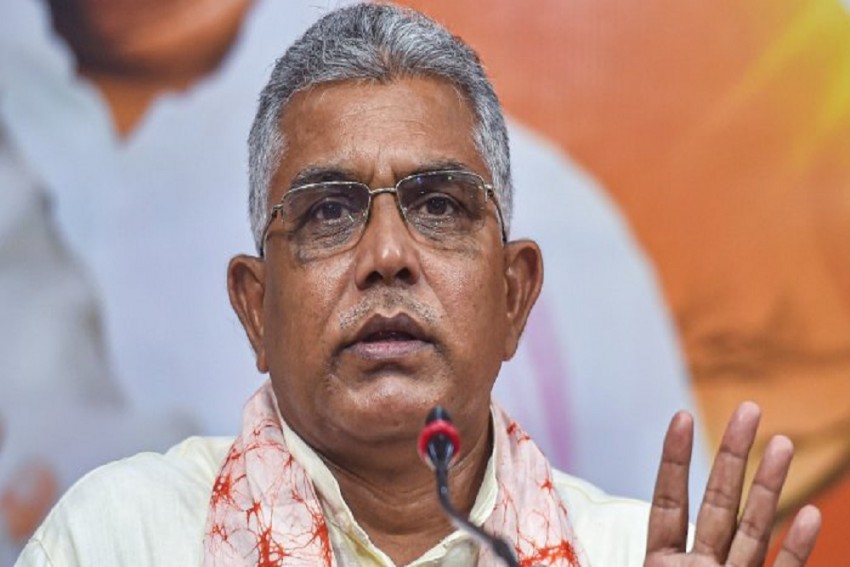 On the night of November 8, Tathagata Roy, one of the most-prominent Bharatiya Janata Party (BJP) faces in West Bengal, retweeted a post containing a video that can modestly be called a mockery of Dilip Ghosh, the party’s national vice-president who served as the Bengal unit president till September. The accompanying text in the original tweet said: “Our Dilu da is the Neo Rabindranath or the Neo Ramakrishna.”

‘Dilu-da’ has been a coinage used on Ghosh frequently by his critics, most people belonging to the so-called secular-liberal camp.

Roy, who calls himself “unabashedly Right-wing Hindu socio-political activist, thinker, writer, ideologue” in his Twitter bio, shared this tweet without any comment of his own. His Twitter profile does not include disclaimers like “retweets do not necessarily mean endorsement”. And if one scrolls down some of his previous tweets, it would be difficult to believe Roy did not endorse the idea expressed in the video, which also mocks Ghosh for his controversial comment that cow milk contains gold.

Barely two days ago, Roy shared a news report that said Ghosh had said Ramakrishna Paramahamsa and Rabindranath Tagore lacked in education. In his own text accompanying the report, Roy wrote, “Oh God! Having been born in a Hindu family, I had to even hear these in the names of Ramakrishna and Rabindranath!”

Ghosh’s remark had actually come in response to journalists’ questions asking for his response on Roy’s suggestions that Ghosh lacked education. Defending himself, Ghosh said that Ramakrishna was illiterate and Tagore did not have formal education beyond class VIII. Lack of formal education was never a matter of importance in Indian society, Ghosh argued.

While the Roy and Ghosh’s dislike for each other was known to journalists for long, never had it come before the public the way it has since the BJP recorded a disastrous performance when compared to their tall, pre-election claims of bagging two thirds majority in the 294-seat assembly, whereas in reality they managed to get only one-fourth.

After this war of words became public, Bengal BJP’s chief spokesperson Shamik Bhattacharya refused to comment on it, saying it was up to the national leadership to deal with it.

While Ghosh is now a national vice-president, Roy used to be a member of the BJP’s national executive before he was appointed, first as the governor of Tripura in 2014 and later as Governor of Meghalaya. His term ended in 2020, following which he rejoined the BJP. At present, he is a primary member of the party.

Roy never won an election in his life. The last time he contested was in the 2014 Lok Sabha election.

As the two senior leaders’ mudslinging in the open started bothering the party’s supporters and other leaders, Roy, from this Twitter handle, gave no indication of stopping.

“Those who are showing great concern saying why internal conflict came out in the public, let me tell them that this happens in politics. Even in a strictly disciplined party like the CPI(M), Buddhadeb Bhattacharjee and Binoy Chowdhury publicly spoke against the party. Kunal (Ghosh) of TMC had screamed demanding Mamata (Banerjee)’s arrest. Congress workers even went to the extent of insulting a national leader by trying to pull down his dhoti. However, after hearing yesterday that Ramakrishna and Tagore were illiterates, I bring an end to this controversy,” Roy wrote.

A senior leader of the party’s Bengal unit said that Roy had been opposing the Bengal BJP’s policy of indiscriminately inducting Trinamool Congress (TMC) leaders ahead of the assembly general elections and was particularly displeased with a series of controversial comments that Ghosh had made.

“Ghosh had all along been ignoring Roy’s comments but he lost his patience after Roy publicly taunted him for a grammatical mistake in one of Ghosh’s tweets in English,” said another Bengal BJP veteran who did not want to be named.

Within the BJP’s present power structure in the state, the leader of the opposition in the state assembly, Suvendu Adhikari, is known to maintain a good rapport with Roy and often pays the veteran a visit to his residence. Ghosh and Adhikari are also known to have difficulties in getting along.