Junior doctors in West Bengal are on strike since Tuesday demanding better security at workplace after two of their colleagues were attacked at the NRS Medical College and Hospital in Kolkata. 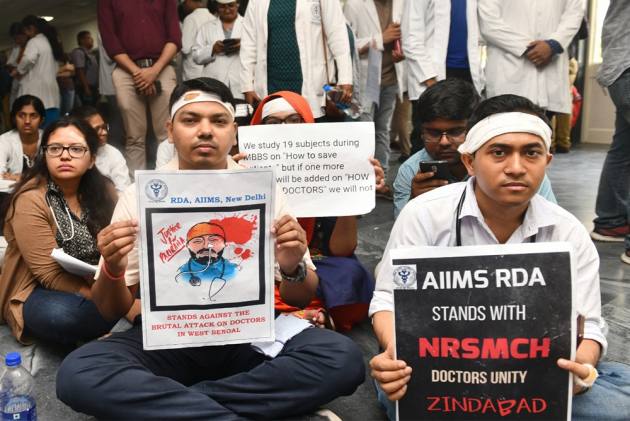 Over 100 doctors in various state-run hospitals in West Bengal on Friday tendered resignation as their protest against an attack on a colleague earlier this week in Kolkata escalated.

"We want unconditional apology of Chief Minister Mamata Banerjee for the manner in which she had addressed us at the SSKM Hospital yesterday. She should not have said what she had," a spokesperson of the joint forum of junior doctors, Dr Arindam Dutta, said.

While visiting the SSKM Hospital on Thursday, Banerjee had contended that "outsiders" had entered medical colleges to create disturbances and the agitation was a conspiracy by the CPI(M) and the BJP.

Listing the six conditions, the agitators said the chief minister will have to visit the injured doctors at the hospital and her office should release a statement condemning the attack on them.

Two junior doctors were assaulted on Monday night by family members of a patient who died in the NRS Hospital.

Meanwhile, the Indian Medical Association (IMA) also launched a three-day nationwide protest from Friday to express solidarity with the doctors in West Bengal and called for a strike on June 17 with the withdrawal of non-essential health services.

The apex body of doctors in the country also renewed its demand for a central law to check violence against health care workers in hospitals and said it should have a provision for a minimum of seven-year jail sentence to violators.

"IMA condemns the recent incident of violence against Dr Paribaha Mukherjee who was brutally attacked by a violent mob at NRS Medical College, Kolkata and demands an exemplary action by the state government. All the legitimate demands of the resident doctors in West Bengal should be accepted unconditionally," RV Asokan, Secretary General of IMA, said.

Union Health Minister Harsh Vardhan in a tweet appealed to West Bengal Chief Minister Mamata Banerjee to "not to make this a prestige issue," urging her to withdraw her "ultimatum".

I feel very sad that doctors across India had to strike work in protest against atrocities on doctors in W Bengal & consequently patients across India are suffering.I appeal to @Mamtaofficial to withdraw her ultimatum to the medical community & not make this a prestige issue. pic.twitter.com/bSIkVFkrLs

"I feel very sad that doctors across India had to strike work in protest against atrocities on doctors in W Bengal and consequently patients across India are suffering," said Harsh Vardhan.

The doctors' strike in West Bengal continues for the fourth day, hampering regular services in all state-run medical colleges and hospitals, and a number of private hospitals.

Though emergency medical services have resumed at the Nilratan Sarkar Medical College and Hospital (NRS), the epicenter of the standoff between agitating junior doctors and Mamata-led Trinamool government in West Bengal, the CM's ultimatum has further added fuel to the resolve of the doctors who have refused to call off protests.

Mamata, who visited the state-run SSKM hospital on Thursday in the wake of disruption of medical services in several parts of the state, warned the doctors of action if they did not resume work. Her ultimatum has sparked outrage across sections of people in the state.

She has even received flak from members of her own family and from the daughter of one of her closest ministerial aides and colleagues.

Two young doctors - Abesh Banerjee, who is a nephew of the Chief Minister; and Shabba Hakim, daughter of Kolkata Mayor and state minister Firhad Hakim, a key aide of the chief minister, have strongly criticised Banerjee's handling of the ongoing strike.

Both Abesh and Shabba said doctors like anyone else, have the right to "peaceful protest" and "safety at work. 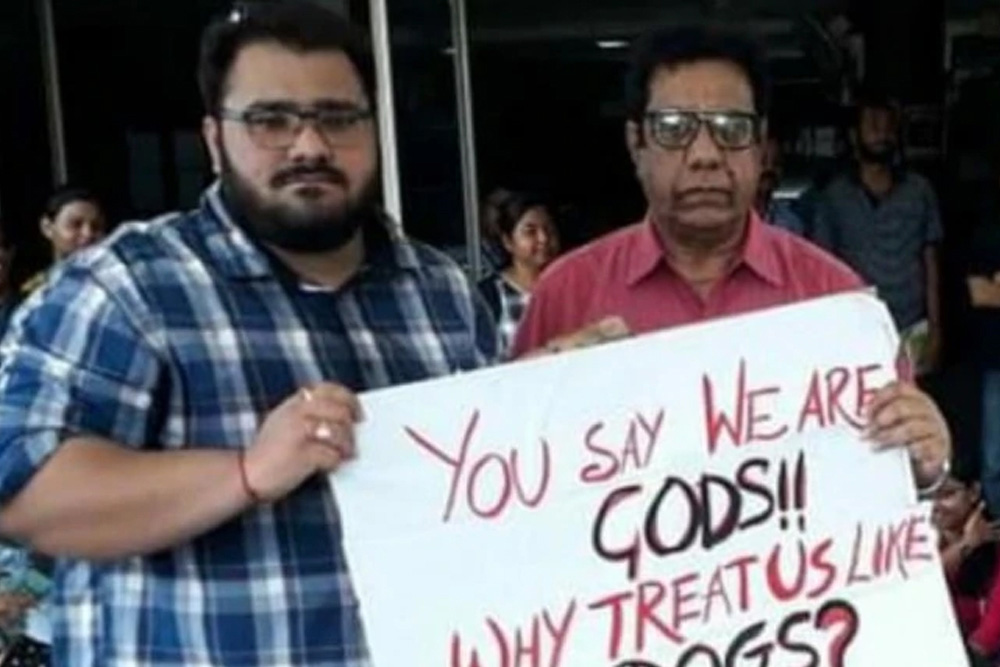 In a Facebook post, Shabba said as a Trinamool supporter she was “deeply ashamed at the inaction and silence of our leaders”.

"For those saying "Ono Rugider ki dosh?" (what is the fault of the other patients) Sabba suggested they should question the government as in why the police officers posted in government hospitals do little to nothing to protect doctors? Please question them that when 2 truckload of goons showed up why wasn't back up sent immediately?" Hakim asked.

"Please question why goons are still surrounding hospitals and beating up doctors?"

In an interview to a Bengali television news channel, the CM brushed off the question about protests by two family members of Trinamool leaders showing solidarity with the agitating doctors, saying “they are children and children can get emotional about things and please don’t drag me in this as I cannot go low to criticizing children...”

She, however, refused to answer questions about her nephew Abesh, leading a protest rally against her government in support of the striking doctors.

Meanwhile, doctors across India staged protests and boycotted work on Friday to express solidarity with their protesting colleagues in West Bengal.

Resident doctors at the All India Institute of Medical Sciences (AIIMS) and Safdarjung Hospital in Delhi were seen wearing bandages on their heads in a symbolic protest.

Condemning the violence in Bengal, the AIIMS Resident Doctors' Association (RDA) has urged all the RDAs across the country to join the token strike.

The Maharashtra Association of Resident Doctors (MARD) said junior doctors at government hospitals in the state will not perform surgeries or attend to out-patient departments (OPDs) between 8 am and 5 pm Friday.

Resident doctors in several government hospitals in Kerala and Hyderabad also staged protests as they started their 'cease work' demonstrations in respective cities.

The Indian Medical Association (IMA) has also asked members of all its state branches to stage protests and wear black badges on Friday.

While the Trinamool has alleged that the BJP and CPI(M) were instigating the protesters as part of a "conspiracy" and giving communal colour to the issue, the opposition has accused the CM for politicsing the issue.

The TMC and the BJP are locked in a bitter turf war in West Bengal, which has been rocked by post-poll violence, with Banerjee accusing the saffron party of trying to foment trouble in the state to topple her government. The BJP has claimed that Banerjee is targeting it as she is rattled by its major gains in Lok Sabha elections.

The striking doctors in Bengal said the reports that patients are not being treated are "completely false."

A 22-year-old medical student from North Bengal Medical College said the doctors have a set of demands and they have given the Chief Minister 24 hours to acquiesce. The period ends in the afternoon at about 3-4 p.m. today after which senior doctors from the hospital are expected to join the juniors who are already on strike.

“We want to keep the crises about politics,” says another doctor.

The doctors’ associations affiliated  to different political parties, have shed aside their political ideologies and shown solidarity with the agitating junior doctors.

A stream of leaders from the Trinamool, the BJP and the Left parties have been visiting striking doctors offering to assist them in the agitation, said a senior doctor.

“The chief minister’s reaction was not in the right direction... instead to listening to the agitating doctors who wanted assurance of security at the hospitals.

“Instead of finding a solution, the chief minister made a most irresponsible statement...,” the doctor said, adding that the agitating doctors realise that patients are suffering and the government should provide a solution by conceding some specific demands and end the impasse as soon as possible.

(With inputs from PTI and Siddhartha Mishra)