Bengal: Exit Polls Give An Edge To Mamata, Predict Huge Gains For The BJP

Both the TMC and the BJP has claimed that they will have a clear majority by bagging more than 200 seats. 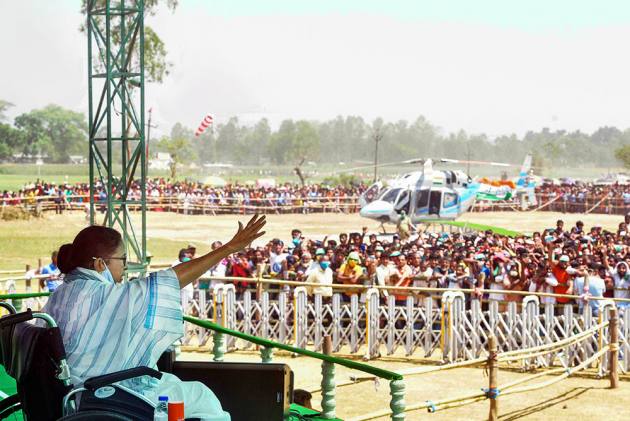 Most exit polls released on Thursday, the final phase of polling in West Bengal, gave an edge to Mamata Banerjee’s Trinamool Congress in returning to power for the third time, while predicting huge gains for the Bharatiya Janata Party (BJP), which emerged as a close contender in the 2019 Lok Sabha elections.

On Thursday, of the seven exit polls released, four predicted a near-similar scenario. A party, or alliance, needs 148 seats to gain a majority in the Assembly.

'Our Top Priorities Are Industrialisation, CAA, Rule Of Law'

Among the rest, three gave the BJP more seats than the TMC. Of them, the CNX Republic poll gave 143 seats to the BJP and 133 to the TMC. The People’s Pulse-India TV poll predicted a comfortable majority for the BJP, which was to win 172-191 seats against only 64-88 in the TMC’s tally. The Jan Ki Baat exit poll predicted 162-185 seats for the BJP against 104-121 seats for the TMC.

This year, the state witnessed its longest-drawn electoral battle and an unprecedented security arrangement, with central paramilitary forces landing in the state even before the elections were announced.

The polling has been largely free from violence, except for the April 10 incident when four voters died after central forces opened fire outside a polling station in Cooch Behar district.

The BJP’s senior leader and Assembly election candidate Swapan Dasgupta had said that this was the most free and fair election the state witnessed in many years.

Both the TMC and the BJP has claimed that they will have a clear majority by bagging more than 200 seats.

Therefore, the elections have largely been perceived to be a close contest between the two forces where the third entity, the Left-Congress-ISF alliance was expected to have a little role.

In the past, exit polls, however, have often failed to correctly predict the results.

The counting is due on May 2 and the results are likely to be out by the evening.