'Post-poll violence in the State is alarmingly worrisome as it is premised to ‘discipline and punish those who ‘dared’ to vote against the ruling dispensation,' Jagdeep Dhankhar said 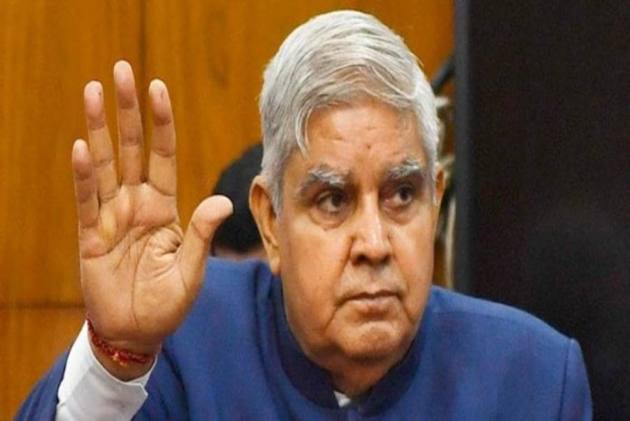 The tensions between Mamata Banerjee government in West Bengal and the Centre refuse to abate with Governor Jagdeep Dhankhar in the eye of the storm as he regularly calls out the administration for an "alarming law and order situation" in the state. In an exclusive interview to Bhavna Vij-Aurora, the Governor says he is neither a ‘post-office nor a ‘rubber stamp’ -- "I cannot afford to ‘fiddle’ in Raj Bhawan in a situation wherein police is a virtual militia and administration in political captivity."

Q: The campaigning during the Assembly elections was violent and vitriolic. Now more than a month after the results, the law and order situation has not improved in the state. What do you attribute this to?

A: Elections were held in four states and one Union territory. Only in West Bengal, the process witnessed violence. Post-poll violence in the State is unprecedented and alarmingly worrisome as it is premised to ‘discipline and punish those who ‘dared’ to vote against the ruling dispensation. Such a stance sounds like the death knell of democracy. Governance in the State is far distanced from constitutional prescriptions.

Wonder Woman As The Masked Crusader

During my visits to post-poll violence-affected areas in Coochbehar and Nandigram, as also to Ranpagli Camp in Assam, where people of the state had taken refuge to save themselves, they narrated tales of harrowing trauma and unimaginable sorrow.

Unfortunately, there is no let-up in such vandalism and the state apparatus offers no respite. The abandonment of legal obligations and nonchalance of lawful authorities could not have been more.

Q: The TMC alleges that the BJP has not been able to digest the defeat, and is orchestrating the violence. It also accuses you of being partisan and helping the BJP in its agenda. What do you have to say?

A: The state is in the grip of unprecedented post-poll retributive violence at an unimaginable scale, with lakhs of people being displaced and property worth hundreds of crores vandalized. Rampant vandalism and hooliganism have resulted in large-scale arson, loot, destruction of property. Numerous instances of rapes and killings at the hands of rogue elements who have no fear of law. People are suffering targeted violence for ‘daring’ to vote against the ruling dispensation.

A highly worrisome aspect is that this ostracisation has now graduated to their social boycott and denial of benefits they are otherwise entitled to. They are being made to suffer an “extortion fee” for living in their own house or running their own business. There is a state of anarchy and lawlessness. All elements of “police state” are amply reflected. Democratic values are openly shredded and trampled by ruling party supporters. People are in mortal fear of police and that in turn is at the feet of ruling party rogue elements.

As Governor I scrupulously adhere to the obligations cast on me by my oath under Article 159 of the Constitution that I “will to the best of my ability preserve, protect and defend the Constitution and the law and that I will devote myself to the service and well-being of the people of West Bengal. None has so far pointed out any transgression. As regards the allegation of being partisan all I can say is that the Governor is an easy ‘punching bag’ when different parties are in power in the State and Centre. I take dictates only from the Constitution and abide by its script.

Q: You are a very proactive Governor and regularly tweet about the law and order situation in the state. Do you think it is part of your duties as the Governor?

A: I am a copybook and not a proactive Governor. Constitutional obligations of the Governor are amply reflected in the oath taken. These are twofold: to preserve, protect and defend the Constitution and the law and to be of service and well-being to the people of West Bengal. My objective is to ensure things lookup. I believe in constructive and not confrontational stances.

It will be an outrage to my oath if I observe silence when the Chief Minister is breaking all rules and norms and violating the very rule of law, which she took the oath of the Constitution on May 5, to preserve, protect and enforce. She stormed into the Nizam Palace at 10:47 hrs on May 17 to force CBI to release these four Narada bribery case accused persons. The Intimidating stance of the Chief Minister was at a crescendo as she threatened ‘release them or arrest me. Such a collapse of constitutionalism is unheard of in the annals of democracy or society governed by law. The State security forces virtually remained mute spectators at all three places.

Surely a Governor is neither a ‘post-office nor a ‘rubber stamp’. I cannot afford to ‘fiddle’ in Raj Bhawan in a situation wherein the police is a virtual militia and administration in political captivity- both engaged vigorously in subserving political masters in complete disregard of their lawful obligations. Governance is shorn of all democratic facets and authoritarianism is evidenced in the repression of any opposition to the ruling dispensation.

Q: Several former bureaucrats have raised the question of the independence of the bureaucracy by the way former chief secretary Alapan Bandyopadhyay has been targeted by the Centre. Do you think the criticism of the government is justified?

A: Union Government is seized of the matter and as such reflections are not called for. However, the narrative is misplaced. A worrisome facet of Governance in West Bengal is that bureaucracy in the State is deeply politicized - being ingratiated to the ruling dispensation. Such a bureaucratic stance cannot be countenanced in a society governed by rule of law. . Governance in the State is far distanced from constitutional prescriptions. The writ of the constitution doesn’t run here.

Q: TMC MP Mahua Moitra has raised questions about six of your OSDs, alleging that they are either your family members or acquaintances. What is the truth in it?

A: The assertion is bereft of any factual content. Her stance that my coterminous appointee OSDs in personal staff are relatives is factually wrong. OSDs are from three states and belong to four different castes. None of them is part of a close family. Four of them are not from my caste or state. This is in a sense an unfolding of a “distraction strategy” to divert attention from the alarming law and order scenario in the State.

Q: She has also been addressing you as "Uncle Ji" in her tweets. Do you think it's inappropriate on her part to do so?

A: Certain things in public life are better left to the discretion and judgment of the maker and have no further comments to offer on this.