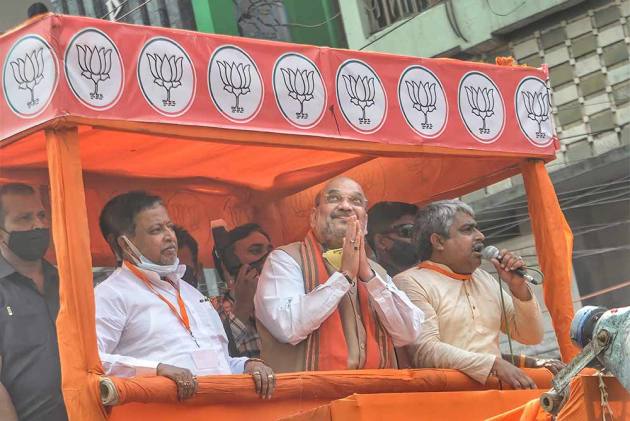 A series of political rallies saw thousands of people gathering in some parts of the state on Thursday, while at some other, people stood in long queues to cast their votes in the sixth phase of the state elections, a day after West Bengal recorded 10,784 new cases of Covid-19 infection and 58 deaths.

This created a unique scene for the state that stood in contrast to the rest of India. While the country was worried about the possibility of another lockdown and politicians and administrators were seen urging people to maintain social distancing, in West Bengal political parties were urging people to gather in large numbers and show their support.

The state has two more phases left, to be held on April 26 and April 29. On Thursday, 43 seats in the districts of Nadia, North 24-Parganas, Purba Bardhaman and Uttar Dinajpur went for the polling, recording 70.42% polling till 4 pm.

Regarding the campaign in the seats where elections will be held in the coming phases, Union home minister Amit Shah had three public meetings scheduled in the districts of Dakshin Dinajpur, Malda, and West Burdwan.

From his rallies in Dakshin Dinajpur and Malda, Shah promised citizenship for the Hindu refugees and a full stop in infiltration as soon as the BJP formed the new government.

“Didi has no plan for Bengal. She is only busy branding others as outsiders,” Shah said.

On the other hand, chief minister Mamata Banerjee had four public meetings scheduled in the districts of Dakshin Dinajpur, Malda and West Burdwan. The chief minister, over the past few days, has been regularly criticising the Election Commission of India and other political parties for not accepting her suggestion of clubbing the last three phases of the election into one.

West Burdwan has the state’s fourth highest number of cases, after Kolkata, North 24-Parganas and South 24-Parganas. On Wednesday, the district reported 556 new cases of Covid-19 infection. Kolkata has been reporting more than 2,000 cases a day over the past few days.

Some of them tested positive during the campaign before the elections, and some after the elections were completed.

Earlier this week, the chief minister had alleged from a public rally in Nadia district that the BJP’s Rantidev Sengupta continued to campaign even after testing positive for the virus. She has also alleged that the BJP’s campaign is worsening the state’s pandemic situation because the party is bringing in leaders and workers from other states.

The Congress has, however, reduced the public rallies significantly.