A case has been registered against BJP leader Suvendu Adhikari under provisions of the National Disaster Management Act and Section 5 of the Official Secrets Act. 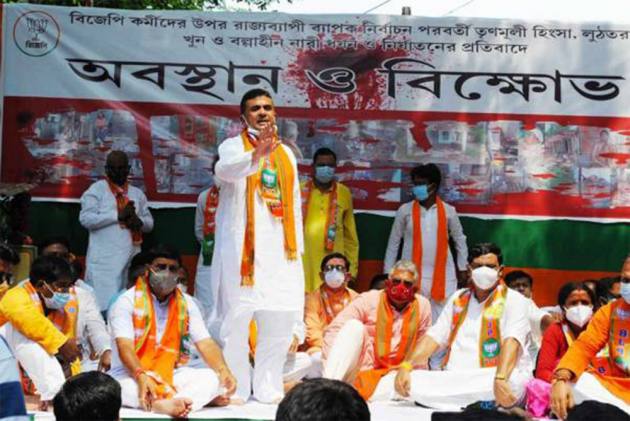 West Bengal Police on Tuesday booked Bengal BJP’s new poster boy Suvendu Adhikari, the leader of the Opposition in the state Assembly, hours after a video clip went viral on social media in which Adhikari was seen claiming to have the phone call records of the district superintendent of police and the TMC’s Abhishek Banerjee.

The case was registered under provisions of the National Disaster Management Act and Section 5 of the Official Secrets Act at Tamluk police station in East Midnapore, Adhikari’s home district where he made the remarks.

“A kid has joined as the new SP (superintendent of police)…I am a veteran player. I am only telling you that you are an officer of central cadre. Do not indulge in any such act so that you may have to join duty in Anantnag or Baramula district in Kashmir,” he said while issuing an apparent threat to the SP, Amarnath K, a 2012 batch IPS officer.

Then he said, “I have all the phone numbers and call records of the phone calls that you get from the office of the nephew (meaning chief minister Mamata Banerjee’s nephew, Abhishek). If you have the state government with you, we have the Central government with us.”

This statement triggered a controversy almost instantly because it came only two days after a global consortium of media houses revealed that Abhishek Banerjee was one of the three Opposition leaders in India whose phones were identified for snooping using the spyware Pegasus. Even the phone of Abhishek’s personal secretary was identified for snooping, reports revealed.

Soon after Adhikari’s speech surfaced on social media and the broadcast of TV news channels, the TMC’s state unit general secretary and spokesperson Kunal Ghosh wrote in a Twitter post: “… publicly told the police that he has in his possession the call lists and records of the office of our leader. This is evidence of snooping.”

He requested the chief minister and her nephew to immediately launch an investigation and Adhikari’s interrogation in police custody to expose the entire conspiracy.

The police complaint at Tamluk police station was filed soon after, naming Adhikari and three others BJP MLAs from the same district who were present during Adhikari’s speech.

The chain of events has left the Bengal unit of the BJP quite embarrassed, as most of the senior leaders of the state unit declined to comment on Adhikari’s remarks.

Requesting anonymity, one state unit leader said, “As a newcomer, he is trying to be extra aggressive to draw the attention of central leaders and the confidence of state unit leaders. While trying to do a little extra and earn some brownie points, he is repeatedly landing the party in trouble. This was absolutely unnecessary at a time a major controversy has broken around snooping.”

Adhikari, one a heavyweight TMC leader, joined the BJP in December last year.

The TMC has taken the developments around the Pegasus project revelations as one of the priority issues to corner the Union government during the monsoon session of Parliament. On Tuesday, while addressing the media through videoconferencing, TMC Rajya Sabha leader Derek O’Brien said that the party “will not allow the proceedings of Parliament until they discuss Pegasus-snooping.”

Under these circumstances, Adhikari’s claim involving surveillance at Abhishek Banerjee’s office has only provided Mamata Banerjee’s party with more ammunition to take on the BJP on the issue of snooping. The issue might also be raised in Parliament, a senior TMC leader said.

According to psephologist Biswanath Chakraborty, a professor of political science at Rabindra Bharati University (RBU) in Kolkata, the situation will help the TMC in gaining the sympathy of the people.

“Politics is a lot about building public perceptions. Here, the TMC has found a good opportunity to portray itself as a victim of the Modi government’s alleged breach of privacy. They are likely to reap dividends out of it,” Chakraborty said.