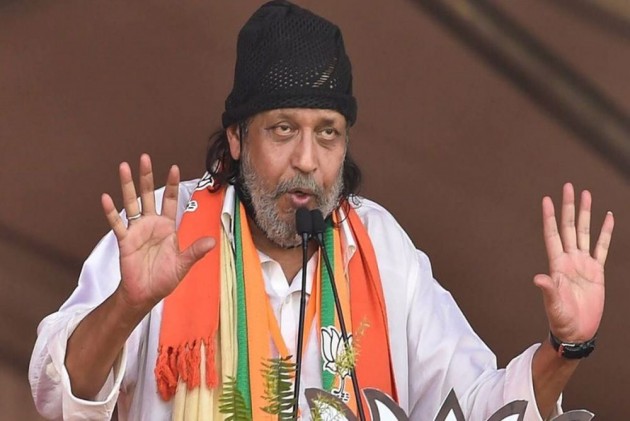 Bollywood superstar Mithun Chakraborty who joined BJP ahead of assembly elections in West Bengal led three back-to-back roadshows in the Jungle Mahal region of the state on Thursday in support of the saffron party candidates.

Chakraborty wore a white kurta with a long saffron scarf loosely wrapped around his neck for the election campaigning. He led the first roadshow in Saltora in Bankura, while the second one was in Keshiary in the Paschim Medinipur district. Later, he took part in another roadshow in Jhargram town.

Amid chants of 'Jai Shri Ram', Chakraborty was on hoodless vehicles, decked with marigold, and greeted the enthused supporters who gathered in large numbers wherever he
went.

People went atop their houses and mobbed Chakraborty's car to have one look at the superstar of yesteryears even as shouts of "guru guru" were ringing in the air.

"The overwhelming response, the emotion of the people show change is inevitable and irreversible in Bengal," he told reporters in Keshiary.

Asked if there was the possibility of him becoming the chief minister if BJP came to power, Chakraborty said, "You are obsessed with the same question."

"I am not a hero, I am their Mithun-da and they are my friends. I have a connection with the people of Bengal," Chakraborty said, exuding confidence about the BJP's victory in the state polls.

Chakraborty arrived at Saltora around 9.30 am but his helicopter could not land at the temporary helipad at Saltora College ground, continuing to hover for at least 15-20 minutes as a large crowd gathered to see the superstar.

The roadshow started around 11 am and a distance of 1.5 km from College More to Ledapalash via Saltora Chowmatha took around two hours. Chakraborty was accompanied by Saltora's BJP candidate Chandana Bauri.

In Jhargram, the actor's helicopter landed at the temporary helipad at Raj College Grounds, then he went to the Sabitri Cinema Hall, where the roadshow started and went on till the five-point crossing.

A large number of people could be seen on both sides of the road struggling to have one look at the filmstar.

Chakraborty, a former TMC MP, had joined the BJP at the Kolkata rally of Prime Minister Narendra Modi last month.