The protests against the controversial Act continued as mobs torched buses and set afire railway property and blockaded roads and rail disrupting train and vehicular movement. 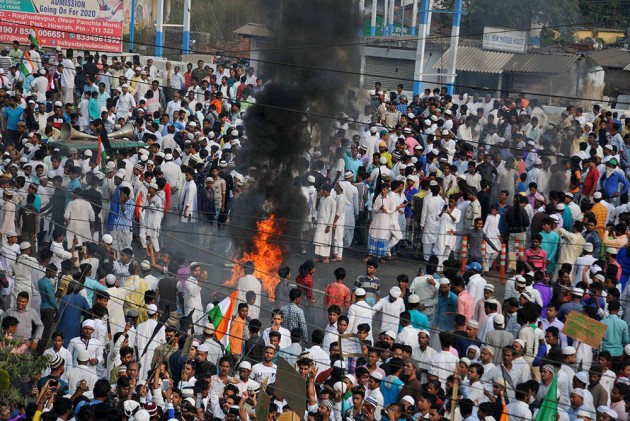 West Bengal Chief Minister Mamata Banerjee on Saturday promised to take strict action against violence and vandalism as part of anti-citizenship law (CAA) protest across the state while reiterating that the Act and the proposed country-wide NRC will not take effect under her rule.

She appealed to people to maintain calm and protest democratically.

"Do not take up law in your hand. Do not put up road blockades and rail blockades and create trouble for the common people on the roads," Banerjee said in a statement released from the chief minister's office.

"Do not cause damage to government properties. Strict action would be taken against those who are found guilty in creating disturbances," the statement quoted her as saying.

The protests against the controversial Act continued as mobs torched buses and set afire railway property and blockaded roads and rail disrupting train and vehicular movement.

In Beldanga of Murshidabad district, a mob torched the station master's cabin and ransacked the ticket counter before setting it on fire.

The protesters, carrying posters against the CAA and the proposed National Register of Citizens, vandalised the Beldanga railway station of Eastern Railway, forcing the railway employees to flee to save their lives.

They also blockaded the track, disrupting train movement between Lalgola and Krishnanagar.

A large group of protesters obstructed the National highway at Beldanga, burning tyres and damaging vehicles, including an ambulance.

In Howrah district, angry protesters barged into the Uluberia station under South Eastern Railway and vandalised its premises as also a couple of trains. A driver as also a railway personnel were also injured by stones thrown by the protesters, a railway official said.

The mob earlier blockaded the track, adversely hitting train movements on the Howrah-Kharagpur section on both up and down lines.

A number of long-distance trains including Falaknama Express, East Coast Express, Mumbai Duranta Express, Bhubaneswar Janshatabdi Express and eleven suburban trains were stranded in and around various stations, even as the protesters moved away from the tracks.

"Some people asked me to alight from the train as the train won't go. Then they dragged me out. Then they ransacked the train," said the guard of the Kandari Express.

"It was a terrifying experience. They broke the window panes. We all ran here and there. There is no chance of any train movement in the next three to four hours," said the station manager.

Governor Jagdeep Dhankhar appealed for peace and asked people to believe in the rule of law and the laws passed by parliament.

"We must believe in parliament and the laws passed by parliament. This violence is unfortunate. But I believe people of Bengal are peace-loving and won't indulge in any kind of violence," said Dhankhar.

The BJP blamed chief minister Mamata Banerjee, accusing her of spreading lawlessness through her statements opposing the CAA.

The legislation has put the Northeast on the boil as people fear that it may exacerbate the problem of illegal immigration, while Muslims across the country apprehend that the move could be a precursor to the country-wide implementation of the National Register for Citizens (NRC).

Also Read: Citizenship Act Will Be Implemented in West Bengal, Neither Mamata Nor TMC Can Stop It: Dilip Ghosh

BJP National General Secretary in-charge of the state Kailash Vijayvargiya alleged that the "shameful incidents" in Bengal were engineered by the infiltrators. "Uluberia and some other railway stations were torched and vandalised. National Highway was blockaded," he said.

Vijayvargiya wondered whether Banerjee should continue in her post "for even a minute more" after the disturbances "fomented by infiltrators" following her statement.

"Is it proper to lead the state to the brink of lawlessness and disturbances through the infiltrators just for the sake of opposing the law? The BJP condemns this. The people will give you a befitting reply in the coming days," said Vijayvargiya.