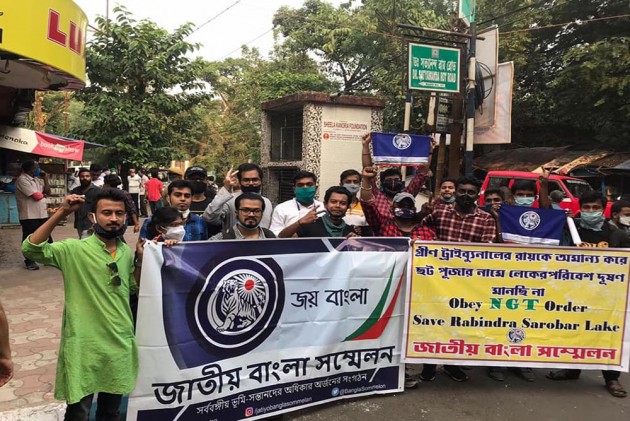 Armed with a Supreme Court order banning Chhath Puja in Kolkata’s Rabindra Sarobar and Subhas Sarobar lakes, the Kolkata Police and members of some Bengali ethnic groups on Friday set up vigils to prevent devotees, from violating the SC order.

Since the two lakes are considered ecologically important, performing Chhath puja rituals in these lakes was prohibited by National Green Tribunal (NGT). Despite the ban, last year the Kolkata Police personnel were seen standing helplessly outside the lake premises while thousands of devotees entered the lake and performed the puja. The next day, photographs and video footage of dead fishes and puja materials floating on the surface of the lake made it on the frontpage of several leading Bengali newspapers, mostly criticising the police for not preventing the entry of devotees inside the Rabindra Sarobar compound. The NGT order had come following a case filed by environmentalist Subhas Dutta.

With most of the devotees hailing from Bihar, the police inaction was seen as part of the state government’s plan to woo Bihari voters, who constitute a significant share of voters in several Assembly constituencies in Kolkata and in some other districts in the state.

This year, the state government had appealed before the NGT to allow Chhath puja in Rabindra Sarobar but the plea was rejected. The government then moved the Supreme Court challenging the NGT verdict but the apex court gave the government no relief.

Following the Supreme Court order, environmentalists, and many Bengali ethnic organisations, demanded that the administration must ensure no one gets to enter the Rabindra Sarobar lake premises on the day of Chhath puja.

However, deciding not to trust the police, members of Jatiyo Bangla Sammelan, an organisation that voices the concerns of the Bengali people, went to the lake complex on Thursday night to set up vigils at all entry gates, to ensure no one managed to enter the compound at dawn on Friday. With their presence, the police also decided to depute their personnel.

However, since Friday morning, numerous groups of devotees tried to enter the premises but their efforts went in vain. On occasions, there were heated altercations, with some devotees alleging a conspiracy had been hatched against them and some others claiming the religious rituals do no harm to the environment. However, the devotees were denied entry.

“We thought there wouldn’t be much trouble this year due to the Supreme Court order. But we were wrong. We faced repeated threats since 10 pm on Thursday. However, we did not lose our calm or our resolve,” said Siddhabrata Das, a member of Jatiyo Bangla Sammelan. “We kept the police apprised of all happenings that could spark tension,” Das added.

On Friday, the police imposed Section 144 of the CrPC around the Rabindra Sarobar lake, prohibiting gatherings of more than four persons. Sensing a possibility of rising tensions, the police also barricaded several entry points to the lake.

Another Bengali ethnic organisation, Bangla Pokkho, organised a gathering in front of the lake on Friday afternoon. “Their way of celebrating Chhath puja makes it look less like a religious festival and more like an opportunity to show their muscle strength,” Kaushik Maiti of Bangla Pokkho said.

Meanwhile, former Kolkata Police commissioner Tushar Talukdar expressed satisfaction on Friday that the lake could be protected. “It’s good to see the administration finally took an active role and implemented the Supreme Court order. The demand for preventing Chhath puja and any other activity that could pollute this important lake has been a long-standing one,” Talukdar told a Bengali TV channel.

The Mamata Banerjee government has created several artificial lakes in Kolkata as well as in some other districts for the festival. However, residents of Rabindra Sarobar’s neighbouring areas who gathered in front of the lake on Friday said that the lake was convenient for the local people.