There is no official figure available in Kashmir regarding the loss of livestock during gun battles. Carcasses of sheep in a shed after an encounter between security forces and militants in Kashmir's Shopian.
Photo: Burhan Mir
Aamir Ali Bhat December 24, 2018 00:00 IST Besides Humans, Kashmir Conflict Is Engulfing Animals (Warning: The following article contains images that may be disturbing to some readers.)

It was January 24, 2018. 48-year-old Ghulam Hassan Bhat went out early morning to tend his livestock including a flock of sheep and a cow placed in a shed, located opposite to his single-story house in Shopian district of South Kashmir.

Bhat’s love for his livestock was uncomplicated and unequivocal. He was taking care of them every time, hoping he would sell all animals at a reasonable price one day.

On the evening of the same day, soldiers cordoned the village of Bhat. They had specific information that a 17-year-old militant Sameer Ahmad Wani had come to meet his family with an associate.

Wani’s home was located a few meters away from Bhat’s home. Before the gun battle broke out, the soldiers, according to eyewitnesses, opened fire on protesters who were helping the trapped militants to escape. One youth Shakir Ahmad Mir and Wani’s sister Saima were killed. Bhat’s daughter Sumaiya was seriously injured.

Amid the clashes, the militants had tried to escape, but they were stuck inside the cowshed of Bhat. In the brief gun battle, the forces killed the militants and destroyed the cowshed. All the animals placed inside were also burnt to death.

“I had 35 sheep and a cow. The army fired shells repeatedly,” said Hassan. “The livestock was the main asset of my property. I lost everything that day.”

It’s been over 10 months, but Bhat’s family is still coping with the loss of their livestock.

“Animals can’t differentiate between right and wrong, war and peace. How could they die a tragic death?” said Bhat, standing near his demolished cowshed.

Ever since the militant commander Burhan Wani was killed in an encounter in June 2018, the militancy in Kashmir has escalated.

In June 2017, the government had declared “Operation All Out”- to wipe out the militants and subsequently, hundreds of militants were killed during systematic encounters.

According to the rights group Jammu and Kashmir Coalition of Civil Society (JKCCS), around 250 militants have been killed so far in 2018, mostly in militancy stronghold districts of Shopian and Pulwama in South Kashmir.

During the encounters, scores of houses along with cowsheds and other essential assets were destroyed.

In Bhat’s neighbouring village, the lone family had met the same fate when the gunfight between militants and soldiers broke out during the intervening night of May 31 and April 1, 2018 leaving five militants and three civilians dead. Three houses and two cowsheds belonging to Abdul Rehman Lone, Ali Mohd Lone and Zahoor Ahmad Lone were razed, and the house of Mohammad Maqbool Lone was partially damaged.

Maqbool said they lost 40 sheep and three cows in the encounter. Next morning, when people gathered near the gunfight site, they took out the dead animals from the rubble. Their carcasses were emitting smoke. 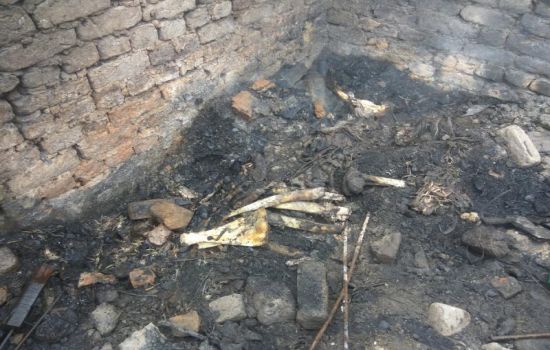 Skelton of a cow under rubble inside a destroyed cowshed in Kachidora, Shopian (Pic credit: Aamir Ali Bhat)

“I pleaded before the soldiers to let us take out cows and sheep from the shed, but they didn’t listen,” said Maqbool. “It was a devastating day for our family.”

After an 18-hour gunfight on the evening of December 8, 2018 in Majgund on the outskirts of Srinagar, a picture of a seriously injured cow was circulated widely on social media. The blood was oozing out from her injured parts. The cow had received a bullet in the abdomen, her udder was injured, and a veterinarian had amputated her tail.

Mohammad Ashraf Mir, owner of the cow has lost his house and cowshed. “What was her fault?” asked Ashraf, looking towards cow. “It gives me immense pain to see her in this condition.”

In Kashmir, since the cowsheds remain close to the owner’s house, livestock like cows, buffaloes, hen, sheep and goats die a tragic death during gun battles.

“No animal rights exist in Kashmir.  Our Valley is the most ignored region. Nobody takes the issue of animal rights violation in Kashmir seriously,” said Dr Maroof Shah, development officer of sheep husbandry. “Animals should be evacuated during encounters. Even rights group should also take this thing very seriously.”

There is no official figure available in Kashmir regarding the loss of livestock during gun battles.

However, the officials in Animal Husbandry claim that they send their doctors to inspect the situation if they receive a notice from higher officials.

“We have sub-centres in every village. We have a responsibility towards livestock present in the local house,” said Dr Hamidullah Dar, Chief Animal Husbandry Officer of Shopian district where most of the livestock died during recent gun battles.

In another 24 hour-long gun battle on December 19 last year, in Batmurran village of South Kashmir, five houses and three cowsheds were razed. Besides, two militants and one civilian, the gun battle left four cows dead.

“The soldiers blew up my cowshed, burning the cow inside it to death. The carcasses were emitting smoke. The war in Kashmir is cruel. It doesn’t spare anyone or anything,” said Mohammad Yaqoob Bhat, owner of the cowshed. “One of the cows was pregnant. We loaded them on the tractor and dumped near the mountain.” 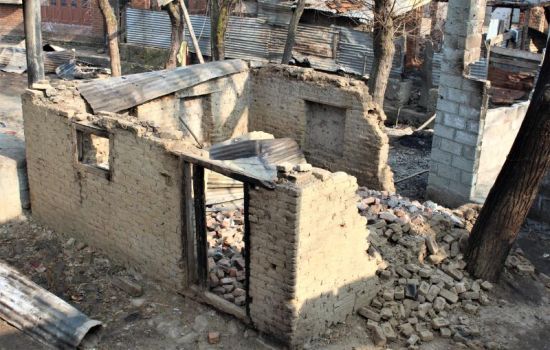 To find the data on animals killed in Kashmir conflict, this reporter contacted People to Ethical Treatment of Animals (PETA), however, they don’t have any data available. “Animals claim allegiance to no nation, and they don’t choose sides. For animals, there are no Geneva Conventions and no peace treaties – just our mercy,” says Dr Manilal Valliyate, CEO, PETA India.

Abdul Rasheed Lone of Gatipora village in South Kashmir had lost his horse on October 9, 2017. “I tried hard to save my horse. I took it to nearby animal husbandry center. However, the horse had lost more blood,” said Rasheed.

Expressing his indignation, Dr Parvaiz, president of doctor’s veterinary association, Kashmir said, “Yes, animal rights are being violated in Kashmir. The victims even don’t get any compensation. Both stray and domestic animal lost their lives. It should be stopped.”