'It is our challenge that if voted to power, we will work towards creating a prosperous state like Gujarat. It is better to convert Bengal into Gujarat rather than a safe haven for Jihadis or Bangladesh,' BJP state chief Ghosh said. 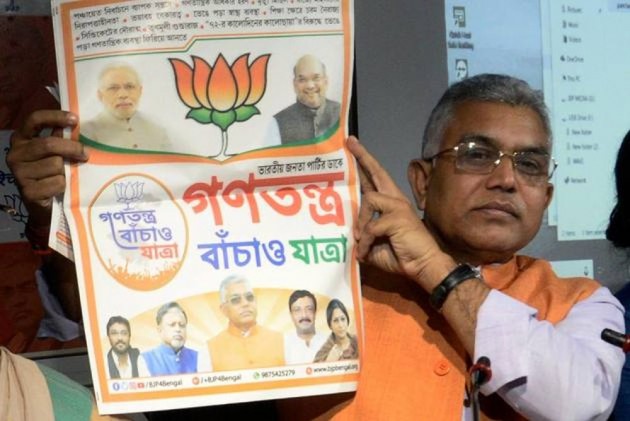 In a strong retort to West Bengal Chief Minister Mamata Banerjee, state BJP president Dilip Ghosh on Wednesday said if voted to power, the saffron party would work towards making the state the "second Gujarat" as it would create employment for its jobless youth.

Ghosh also said it was better to transform Bengal into Gujarat rather than converting it into Bangladesh and a safe haven for Jihadis.

The recent general election in Bengal saw a heated war of words between the Banerjee-led Trinamool Congress (TMC) and the Bharatiya Janata Party (BJP).

The acrimony resulted in clashes after the poll, leading to the loss of several lives in various parts of the state.

In the fiercely-fought election in Bengal, the saffron party won 18 Lok Sabha seats, only four less than the TMC's 22.

"It is our challenge that if voted to power, we will work towards creating a prosperous state like Gujarat. It is better to convert Bengal into Gujarat rather than a safe haven for Jihadis or Bangladesh. We will never allow Bengal to get transformed into Bangladesh," Ghosh said.

Banerjee on Tuesday said the BJP was "planning to turn Bengal into Gujarat", adding, "I am ready to go to jail, but will not allow it."

"Bengal is not a sweetmeat. Bengal is also not a toy and you cannot play around with it. In Bengal, we respect Gandhiji more than in Gujarat," she had said.

Clashes broke out between BJP workers and the police here on Wednesday during a rally to protest against the post-poll violence in West Bengal, with the saffron party claiming that several of its workers were injured.

Senior BJP leader Mukul Roy accused the TMC of using the police to retain power in West Bengal and lauded the party workers for not falling into the trap of the state administration.

He said as the saffron party was waiting to come to power in West Bengal, the workers behaved responsibly, despite provocations by the police.

"Today, despite so many provocations, we did not fall into their trap. I thank the BJP workers for behaving exceptionally well and in a responsible way. We all should remember that we are a party waiting to come to power (in Bengal), so we should behave in a responsible manner. People are looking at us as an alternative," Roy said.

He criticised the police for the "unprovoked" use of water cannon and firing of tear gas shells.