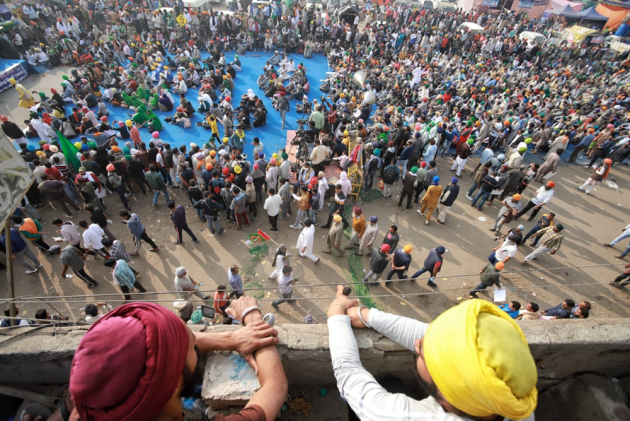 A nationwide strike on Tuesday called by agitating farmer unions to press for repeal of the Centre's agri laws is likely to have an impact in some northern states after several trade unions extended support to it even as the farmer leaders said that no one should be forced to join the shutdown.

With almost all Opposition parties too backing the 'Bharat Bandh and many announcing parallel protests in support of the farmers, the Centre has issued an advisory directing the states and Union Territories to tighten security and ensure peace is maintained.

Appealing to everyone to join the "symbolic" bandh, farmer leaders said they will block key roads during their "chakka jam" protest from 11am till 3pm as part of their stir, which has drawn people from northern states especially Punjab, Haryana, Uttar Pradesh and Delhi since the last 12 days.

"Our bandh is different from that of political parties. It is a four-hour symbolic bandh for an ideological cause. We want that there should be no problem to the common people. We appeal to them not to travel during this period," farmer leader Rakesh Tikait said.

"We also urge shopkeepers to shut their outlets during this period," he said.

The leader also claimed the bandh will be effective across the country.

"The Modi government will have to accept our demands. We want nothing less than a withdrawal of the new farm laws," farmer leader Balbir Singh Rajewal said.

The Centre and the farmer unions will hold the sixth round of talks a day after the bandh as previous discussions failed to end the deadlock.

Targeted by opposition parties for the deadlock, the BJP hit back and accused them of "shameful double standards", claiming many of them had endorsed these reforms when in power or had supported them in Parliament.

Senior BJP leader and Union minister Ravi Shankar Prasad said the opposition parties have joined the agitation in a bid to save their existence after being repeatedly rejected by people in different elections across the country.

Prasad said a section of farmers has fallen in the grip of some people with "vested interests" and asserted that the government was working to address their misgivings about the reforms.

He appreciated the protesting farmer unions for not associating their stir with any political parties.

The agitating farmers have drawn support from various quarters including artists, sportspersons and workers' groups.

Tuesday's strike could impact the transport of goods as the All India Motor Transport Congress (AIMTC),  the apex body of transporters representing about 95 lakh truckers and other entities, said it will suspend operations in the entire country to support the bandh.

The All India Railwaymen’s Federation too extended support to the farmers and said its affiliates will organise dharna during lunch hour.

The railway union, which has around nine lakh members, is the latest to show solidarity with the agitating farmers, who have found support from transport unions and the joint forum of trade unions like the Indian National Trade Union Congress (INTUC), All India Trade Union Congress (AITUC), Hind Mazdoor Sabha (HMS) and the Centre of Indian Trade Unions (CITU).

Traders' body CAIT and the All India Transporters Welfare Association, however, said markets across the country including in Delhi will remain open and transport services will also remain operative.

While the Confederation of All India Traders (CAIT) claims to represent around seven crore traders, AITWA said it represents 60 to 65 percent of the organised transport sector in the country.

Bank unions also said they will not participate in the Bharat Bandh on Tuesday, even as they expressed solidarity with farmers protesting against the new farm laws.

All India Bank Officers' Confederation (AIBOC) General Secretary Soumya Datta said the union has expressed its solidarity with farmers but will not be participating in the Bharat Bandh called by them.

Similarly, All India Bank Employees' Association (AIBEA) General Secretary C H Venkatachalam said union members would wear black badges while on duty, stage protest after or before working hours and display placards before bank branches to support the cause of farmers of the country, but banking operations will not be hit.

The Congress, Nationalist Congress Party (NCP), Trinamool Congress, DMK and its allies, TRS, RJD, Aam Aadmi Party, Samajwadi Party and the Left are among the political parties that are backing the strike.

Bahujan Samaj Party (BSP) chief Mayawati too tweeted on Monday in support of the bandh and appealed to the Centre to accept the farmers' demands.

Several of these parties have announced protest programmes for Tuesday while supporting the Bandh call by the farmer groups, who have maintained that their stir is political.

While the Congress has said it will hold protests that day at all district and state headquarters, the ruling TMC on West Bengal has announced sit-ins in various areas for three days.

The Aam Aadmi Party said it will hold a peaceful demonstration in the national capital.

In the wake of the call for bandh and protests, the Union Home Ministry has issued an advisory to state governments and UT administrations to ensure that the COVID-19 guidelines issued about health and social distancing are strictly followed.

The states and UTs were told that peace and tranquillity must be maintained during the 'Bharat Bandh' and precautionary measures taken so that no untoward incident takes place anywhere in the country, a home ministry official said.

Thousands of farmers, mostly from Punjab, Haryana and Uttar Pradesh, are protesting at various border points of Delhi against the new farm laws for the last 12 days.

The bandh has been called against Farmers (Empowerment and Protection) Agreement of Price Assurance and Farm Services Act, 2020, the Farmers Produce Trade and Commerce (Promotion and Facilitation) Act, 2020, and The Essential Commodities (Amendment) Act 2020, all of which were passed by Parliament recently.

"In 2013, Rahul Gandhi had given direction to all the chief ministers of the Congress-ruled states to delist fruits and vegetables from the APMC and allow them to sell it directly in the open market," Prasad said.

NCP chief Sarad Pawar had written as the Union agriculture minister in the UPA government to chief ministers strongly advocating for greater participation of the private sector in the farm sector and highlighting the need for making suitable regulatory and policy changes for that, Prasad said.

The Delhi Traffic Police on Monday tweeted about the closure of the Singhu, Auchandi, Piao Maniyari and Mangesh borders. The Tikri and Jharoda borders are also closed, it said and advised alternative routes for travelling to Haryana and UP.

The National Highway-44 (NH-44) has also been closed on both sides. The Gazipur border on NH-24 is also closed for traffic from Gaziabad to Delhi.