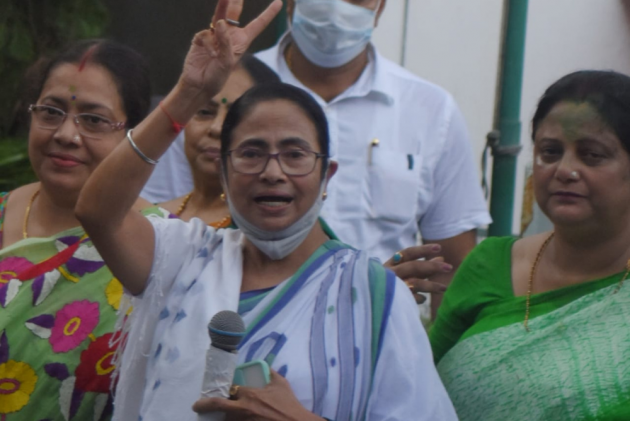 Mamata Banerjee won the Bhawanipur byelection with a record margin on Sunday with 58,389 votes. The West Bengal CM beat the BJP's candidate Priyanka Tibrewal after 21 rounds of counting on Sunday. She secured 84,709 or 71.86 per cent of the total 117,875 votes polled.

Banerjee's winning margin beats her own former record of 54,213 voted in the 2011 byelection (after she resigned from the Lok Sabha to be the chief minister) and 25,301 in 2016. In the 2011 assembly general elections, her confidante Subrata Bakshi won by 49,936 votes.

Banerjee had to win the crucial Bhawanipur by-election to continue as the Chief Minister after losing from Nandigram constituency – 170 km southwest from her home in Kalighat in Bhawanipur constituency area – by a thin margin of 1,946 votes in the March-April Assembly elections in the state. Banerjee has since challenged the Nandigram verdict in the Calcutta high court.

Addressing the media on Sunday after winning Bhawanipur, the Banerjee said, “There was a conspiracy in Nandigram. The people of Bhawanipur have given a befitting reply.”

Meanwhile, at Bhawanipur, while the polling rate was low - only 57% of voters came to the polling stations – the high share of votes polled in favour of Banerjee enabled her to script a victory with such a satisfactory margin. Her nearest rival, Tibrewal, got 26,320 or just 23.32 per cent of the polled votes.

In the by-election, the CPI(M)’s Shrijeeb Biswas, who came third and lost his deposit, got only 4,201, or 3.56 per cent of the polled votes, reflecting the Left’s continuous erosion in the support base. Candidates lose their deposits when they fail to secure more than one-sixth of the polled votes. In the general election, the CPI(M)-supported Congress candidate had got only 4.09 per cent votes.

On Sunday, Banerjee had been leading right from the first round when the postal ballots were counted. Gradually, the lead went on increasing. She led over the BJP in all eight municipal wards that make the assembly constituency.

In the assembly general elections, the TMC's Shobhandeb Chattopadhyay won from Bhawanipur with a margin of over 28,000 votes. He resigned to allow the party chief to contest from her home turf. He will be contesting from Khardah in North 24 Parganas district where polls will be held on October 30. The TMC's Khardah winner Kajal Sinha's death necessitated the byelection.

In the assembly election, the TMC won 213 of the 292 seats where elections were held. Jangipur and Shamserganj elections were deferred due to the death of candidates. On Sunday, after winning both the seats, the TMC’s tally in the Assembly stood at 215. Meanwhile, four BJP MLAs have already switched over to the TMC, even though none of them has resigned and thus remain BJP MLAs on paper.

While no political observer saw any possibility of Mamata Banerjee losing on her home turf, her winning margin remained a matter of curiosity, as people believed a big winning margin was necessary to keep up the tempo of the party's national expansion plan - the party is actively seeking to make a mark in Tripura, Assam, Goa, Manipur and Meghalaya, as of now.

"The party is projecting the Bengal chief minister as the most capable force to take on the Narendra Modi-led BJP in the 2024 Lok Sabha elections and her big margin victory is necessary to show the country that she has reduced the BJP to insignificance in her own state," said a TMC veteran who did not want to be named.

The TMC was also leading in two other Assembly seats - by over 58,000 votes in Jangipur over the BJP and over 20,000 votes over the Congress in Shamserganj in Murshidabad district where deferred elections took place along with Bhawanipur bypoll on September 30.

Its massive lead over the Congress in Shamserganj reflects how the TMC has managed to end the Congress' heydays in Murshidabad, the district the Bengal Congress president and former Congress leader in the Lok Sabha Adhir Ranjan Chowdhury hails from.

The election commission of India has imposed a ban on victory celebrations, taking the pandemic situation into consideration, but scores of TMC supporters gathered outside the residence of Banerjee at Kalighat, part of the Bhawanipur Assembly segment.

“Next stop Delhi. People now want to see her in the leading role in Delhi,” said state urban development minister Firhad Hakim, who too lives in the Bhawanipur Assembly constituency area.