The Dalit group's founder also said the Bhim Army will support the SP-BSP alliance if it fields Satish Chandra Mishra, Mayawati's general secretary and Brahmin face of the BSP, from the Varanasi seat. 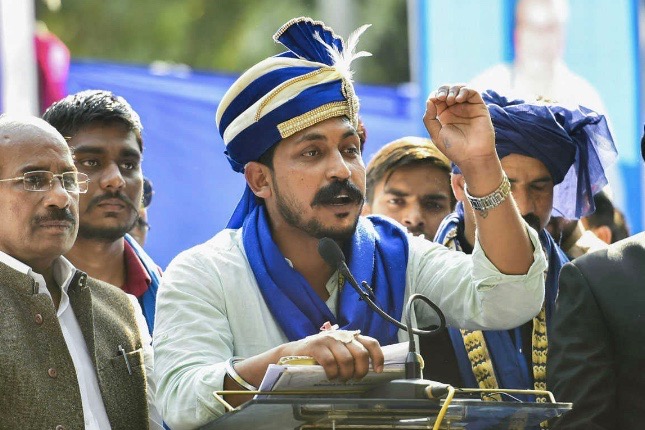 Nearly a month after announcing that he would contest against Prime Minister Narendra Modi from Varanasi, Bhim Army chief Chandrashekhar Azad Wednesday rescinded his decision, saying his outfit will support the SP-BSP alliance and the Dalit vote should remain intact to defeat the BJP.

The Dalit group's founder also said the Bhim Army will support the SP-BSP alliance if it fields Satish Chandra Mishra, Mayawati's general secretary and Brahmin face of the BSP, from the Varanasi seat.

Earlier, the Bhim Army chief had accused Mishra of misleading Mayawati and conspiring against the Dalit group.

"I have decided not to contest from Varanasi because I do not want that my decision should strengthen the BJP or Modi in anyway. We all want to defeat the BJP," he said.

Chandrashekhar had earlier told PTI that he won't contest from the seat if his candidature "strengthened" Modi.

On Mayawati's criticism of him, he said, "Our own people are calling us agents of the BJP, but I still want her to become prime minister."

At an event to mark BR Ambedkar Jayanti in Madhya Pradesh's Mhow on April 14, he had said that the Bhim Army and not Mayawati was the "real well-wisher" of Dalits.

Chandrashekhar said that if the SP-BSP alliance fielded Mishra from Varanasi, they will also be able to get some upper caste votes.

He had earlier attacked Samajwadi Party chief Akhilesh Yadav "for giving promotion to officers who inflicted atrocities on Dalits".

"His (Akhilesh) father says in Parliament that he wants Modi to become prime minister again. They are agents of the BJP, not me.

"They call me an agent for questioning them. Yes, I am an agent of B R Ambedkar... If my own people were not in my way, I would have shown you (Akhilesh) that if we can vote you to power, we can pull you down too,” he had said.

Chandrashekhar had announced at a rally in the national capital last month that he would contest against Modi from Varanasi and had welcomed support of all parties, including the Congress, to take on the BJP.

He had also sought the support of the SP and the BSP for his candidature, saying the Dalit group would back their alliance in other seats.

The SP-BSP-RLD alliance is yet to declare its candidate against Modi in Varanasi.

The Chandrashekhar-led group shot to limelight during the May 2017 clashes between Dalits and upper caste Thakurs in Saharanpur.

Chandrashekhar was arrested after the clashes. Though he was granted bail by the Allahabad High Court, the Uttar Pradesh police arrested him under the stringent National Security Act.

He was released in September 2018 after 16 months in jail.