Bhim Army chief Chandrashekhar Azad says that his sole aim is to defeat the BJP in the upcoming Lok Sabha elections. 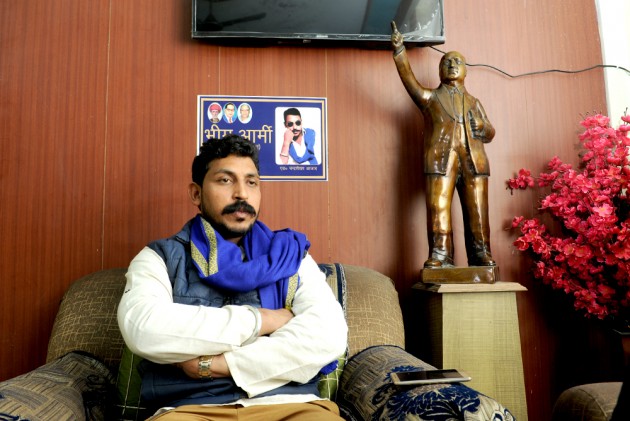 Days after announcing his decision to challenge Prime Minister Modi in Varanasi, Bhim Army chief Chandrashekhar Azad says that his sole aim is to defeat the BJP in the upcoming Lok Sabha elections. In an exclusive interview to Outlook, Azad, who has emerged as the new Dalit icon, also denied any tie-up with the Congress, despite Priyanka Gandhi Vadra meeting him in Meerut.

Q) What’s the reason behind your decision to take on PM Modi in Varanasi?

Modi is anti-Dalit and his government’s policies have ruined the country. I will make sure that he is not re-elected to Lok Sabha this time. I have requested the grand alliance (SP-BSP-RLD) to lend support to me in Varanasi to defeat the prime minister and send him back to Gujarat. We have taken a pledge to defeat the BJP in this election.

Q) You have maintained that Bhim Army wouldn’t be in the fray this time. What made you change your decision?

During our hunkar rally in Meerut, we were arrested though we had permission to hold a rally. Our members were beaten up and detained. If Modi returns to power, the bahujan community will be at the receiving end. It will sound the death knell for all constitutional institutions. Our rights will be curtailed. Uttar Pradesh is a sacred land and we urge all political parties to support us.

Q) Congress general secretary Priyanka Gandhi’s meeting with you has fueled speculations that Bhim Army will ally with the Congress in UP. Are any talks on?

Priyanka Gandhi visited me in the hospital out of concern and she pledged her support in our fight against Modi. I didn’t have any prior knowledge about her visit and we didn’t discuss politics.

Q) What If Congress approaches you?

I won’t ally with Congress at any cost. My primary aim is to defeat the BJP and we will support parties which are fighting them. I am working towards fulfilling the vision of Babasaheb Ambedkar and I am not here for political gains.  My aim is to empower the bahujan community.

Q) If you fight elections, it is going to upset the SP-BSP alliance. And BJP is going to benefit from a tri-cornered contest.

My effort will be to sort it out with Mayawatiji. If they extend support to us in Varanasi, we can return the support at other 79 seats. If they wish to field strong candidates like Mayawati, Akhilesh or Mulayam Singh to challenge Modi in Varanasi, I am ready to support them too. Our path is the same and we should go together. Bhim Army will lend its support in other states like Bihar and Maharashtra also.

Q) Did you consult Mayawati on this?

Not yet. Hope she agrees. I am not waiting for anyone’s invitation.

That’s her personal opinion. Earlier people used to allege that I am a BJP agent. Now, after Priyanka’s visit, they call me a Congress agent. By deciding to challenge Modi, I proved that I am anti- BJP.

Q) Is BSP doing enough for the Dalit community?

I haven’t seen BSP doing enough in the last five years for the community. I was jailed in Sabirpur along with 40 people and no leader came forward to help us to get bail. No leaders have visited the houses of the victims of the April 2 violence, where many Dalits were killed. We are not here to become MPs or MLAs and to make money.

Q) Do you think the condition of Dalits has worsened under this government?

Atrocities against Dalit community have increased after this government took over in 2014. They diluted the SC/ST Act and when Dalits called a strike to oppose it, many were killed in the violence. Hundreds are still languishing in jail. There is a large-scale oppression of Dalits in the country now.

Q) What is your take on the Bill on 10 per cent reservation for upper caste?

It’s a mockery of the Constitution. Our Constitution clearly says that reservation should be based on social backwardness. It’s a political move to appease the upper castes.  If we come to power, we will scrap it.

Q) Has the Balakot strike changed the mood in favour of the BJP in UP?

BJP has been politically exploiting the issue. Under this government, we had the maximum number of martyrs.  We have also seen how PM was absent from the scene for almost 10 hours after the Pulwama attack. They have no concerns for Dalits, jawans, farmers or youth of this country. Their only aim is to gain power by hook or crook.

Q) But BJP claims that they are pro-Dalit…

After I announced my decision, Prime Minister Modi started washing the feet of sanitation workers. Kanshi Ram once said that once the caste hegemony is threatened, they will go to any extend to appease them. Modi’s act shows that he is worried.  People of Uttar Pradesh will teach BJP a lesson.

Q) Kanshi Ram’s sister shared the dais with you during a rally at Jantar Mantar. It’s being said that she doesn’t share cordial relation with Mayawati…

I always share a warm relationship with her. It was the birth anniversary of Kanshi Ram and I am happy that I got her blessings.