Aparajita Sarangi, the BJP MP from Bhubaneswar and national spokesperson, was caught on camera violating COVID norms for the third time in the last few weeks 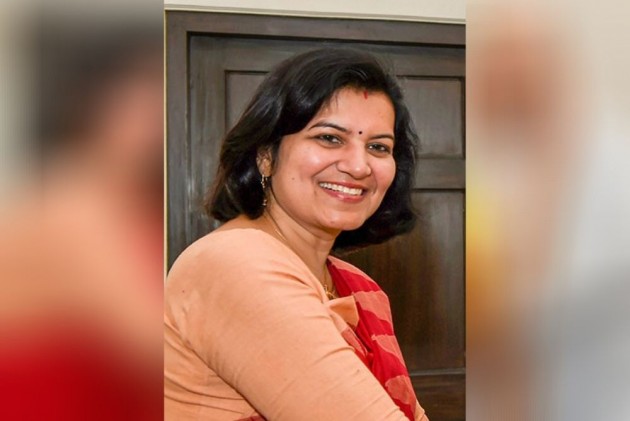 For Aparajita Sarangi, it was one of the many violations. This morning, a three-member team of Bhubaneswar Municipal Corporation (BMC), along with police personnel, swooped down on the office of Bhubaneswar MP in the Palaspalli area of the city and sealed it for 15 days for gross violation of restrictions in place in view of the Corona pandemic at an event there two days ago.

On October 8, the Bhubaneswar MP was caught on camera violating COVID-19 norms for the third time in the last few weeks. In a video that went viral on social media, Sarangi was seen surrounded by hundreds of women at her birthday bash. Barring one, none of the women wore masks and social distancing went for a six as hordes of women jostled with each other to greet the MP on her birthday. The Odisha government, which had winked at the earlier instances of violation by the BJP MP, decided that enough was enough.

This is your Mp From Bhubneswar,Odisha
Ms Aparajita sarangi
Violating all the covid-19 rules and celebrating her Birthday U should Take action against her.. pic.twitter.com/9NSAoKqdNQ

“We are sealing the building (Plot No A/56) for 15 days for violation of COVID guidelines. We found that all three guidelines – wearing masks, social distancing and large gathering – were violated in this case. We have asked for a complete list of all those who attended the gathering on Friday. All of them will be tested for COVID and the whole building will be sanitized during this period,” deputy zonal commissioner Rabi Narayan Jethy, who led the BMC team, told media persons.

In her first remark after the sealing, the Bhubaneswar MP, has termed it ‘vindictive’. “When will the BJD office be sealed?” she asked at an impromptu press conference outside her sealed office while citing 17 still pictures and a video purportedly showing violation of COVID norms by BJD ministers and MLAs.

The action by BMC comes a day after Odisha’s Minister of State for Home Capt. Dibyashankar Mishra dashed off a letter to Nityanand Rai, his counterpart at the Centre, protesting against the flagrant violation of norms by the MP. “Such irresponsible behaviour on the part of a people’s representative will demotivate the COVID warriors and is an insult to all those who have lost their lives,” Mishra had said in the letter, which was accompanied by a video of the birthday bash on Friday. For good measure, he also urged Rai to bring the matter to the notice of Prime Minister Narendra Modi, who has appealed to everyone to abide by the COVID norms.

In her response, Aparajita had used the same ‘double standards’ argument that she used at her press conference today to have a go at the state government. “A few days back, during senior BJD MLA Pradeep Maharathy’s funeral, a cabinet minister and a ruling party MLA, both of whom were COVID positive, participated in it. What did Mr. Mishra do on that occasion? Did he write to the Chief Minister about it?” he asked.

Meanwhile, COVID warriors, including health and ASHA workers, have written to the Bhubaneswar DCP action against Aparajita for repeated violation of COVID norms.

The charge of ‘double standards’ levelled by Sarangi of course is not without basis. The state government has indeed winked at several incidents involving party leaders, including some ministers, where all COVID norms were thrown out of the window, the funeral of Maharathy being only the latest such incident. A few weeks ago, two BJP MLAs had been booked by Sambalpur police under various sections of the Epidemic Act.

In an effort to fend off the charge of ‘double standards’, Puri police, which had sat tight on a case filed against BJD MLA from Satyabadi Umaballav Samantaray at the Sea Beach police station by a Puri based organization, registered a case against him later on Friday. As if on cue, the MLA apologised for his indiscretion in attending Maharathy’s funeral on September 28. In a video message, the MLA attributed his indiscretion to ‘emotions’ at the death of a dear colleague while sating he was ready to face action under the law. Jagannath Sena, another Puri based organisartion, also filed a case against Minister Samir Dash and Jyoti Prakash Panigrahi at the Kharavela Nagar police station today.

With by-elections to two Assembly constituencies coming up, the war of words between the two ‘frenemies’ can be expected to get only shriller in the days ahead.