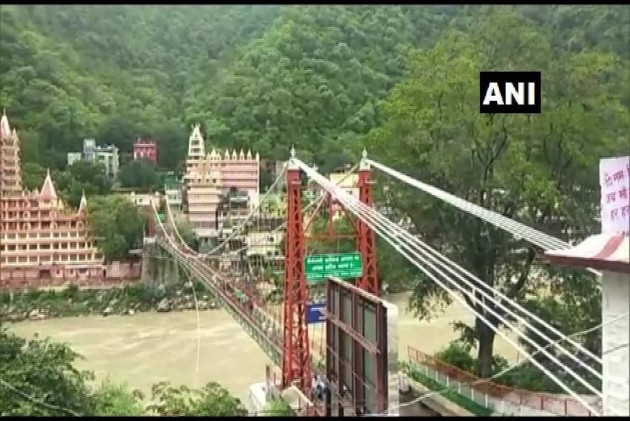 Lakshman Jhula, the iconic suspension bridge across the Ganga in Rishikesh, was closed to traffic Friday as experts feel it cannot sustain more load, officials said.

The bridge was closed on the recommendation of a team of experts who found most of its parts in "fail" or "collapse" condition, Additional Chief Secretary Om Prakash said.

The team recommended immediate closure of the bridge to all traffic and pedestrian movement as it was not in a condition to sustain any more load, he said.

There has been an unprecedented rise in traffic and pedestrian movement along the bridge in recent times and the bridge towers appear to be leaning towards one side, he said.

The decision was taken as keeping it operational could have been risky, the official said.

"It is highly recommended that the bridge should be closed with immediate effect otherwise any big mishap can take place anytime," the team of experts had said in its report to authorities.

Built in 1923 over the Ganga river, Lakshman Jhula is an iconic landmark in this city of Uttarakhand that is renowned as a centre for studying yoga and meditation.

It connects Tapovan village in Tehri district on the western bank of the river with Jonk in Pauri district.

One of the main attractions for tourists and devotees coming to Rishikesh, the pedestrian bridge also used by two-wheelers was named after Hindu mythological character Lakshman as it stands where he is said to have crossed the river with the help of jute ropes.

Many successful Hindi movies and serials like "Ganga Ki Saugandh", "Sanyasi" and popular detective serial "CID" have been shot at the Lakshman Jhula.