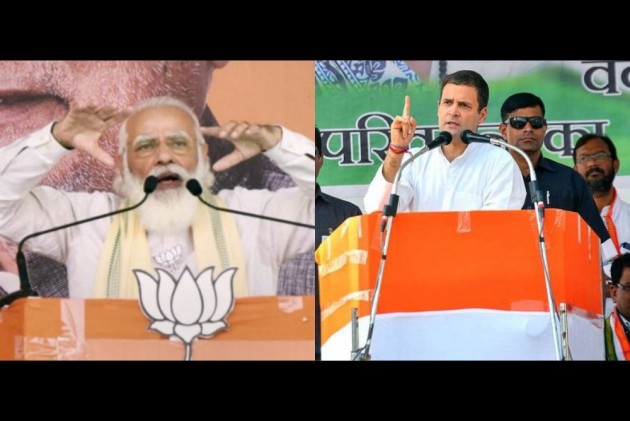 The state of Bihar saw intense political campaigning on Friday, just a week before it is set to go to the hustings.

It saw all major political parties pulling out their big guns — from Prime Minister Narendra Modi campaigning in Sisaram to former Congress president Rahul Gandhi holding a joint rally with RJD leader and the Opposition alliance’s chief ministerial face Tejashwi Yadav— ahead of the Assembly elections.

Modi invoked the alleged poor law and order in the state under RJD rule and said people have decided that those who have a history of making Bihar “Bimaru” will not be allowed to return.

“Bimaru” is an acronym for Bihar, Madhya Pradesh, Rajasthan and Uttar Pradesh. It was used to refer to the “poor economic condition” of these states.

The Prime Minister also referred to the Galwan clash with Chinese troops and said the sons of Bihar laid down their lives for the Tricolour but did not let “Mother” India's head bow.

The standoff with China in Ladakh also saw mention at Rahul Gandhi’s rally who accused Modi of having "insulted" the soldiers with his comment that nobody had intruded into Indian territory in Ladakh, and demanded that he tell the country when will the Chinese "be thrown out".

Rahul’s blistering attack on Modi included references to issues like demonetisation, GST and the handling of coronavirus pandemic.

Raking up the migrant crisis triggered by the pandemic-induced lockdown, Rahul alleged that when workers from Bihar were being "chased away" from other states, the Prime Minister did nothing to help them.

“He bows before the labourers but does not help them when they need it," he said.

A huge gathering was seen at the Hisua rally venue, with people also crowding the roof of a college building where it was held.

Standing next to Rahul during the rally in Hisua, Tejashwi Yadav, the chief ministerial candidate of the Mahagathbandhan, focused his attack on National Democratic Alliance (NDA)’s chief ministerial candidate Nitish Kumar. Tejashwi said the elections that were under way will not be fought on the issue of caste or religion but unemployment and poverty.

He went on to assert that Nitish Kumar will see his farewell the very next day Lalu Prasad Yadav will be released.

"Laluji is getting released on November 9. He has got one bail and will secure another on November 9, which also happens to be my birthday. The next day, Nitishji will have his farewell,” Tejashwi said, exuding confidence about winning the elections.

The Bihar Legislative Assembly Elections 2020 will be held in three phases --- on October 28, November 3 and 7. Results will be declared on November 10. The Election Commission said the polls will be held in fewer phases this year.