Tejashwi Vs Nitish: Bihar Readies For D-day Amid Predictions Of Change

The state has 243 assembly constituencies and the most keenly watched will be Raghopur in Vaishali district from where Tejashwi Yadav is seeking re-election. 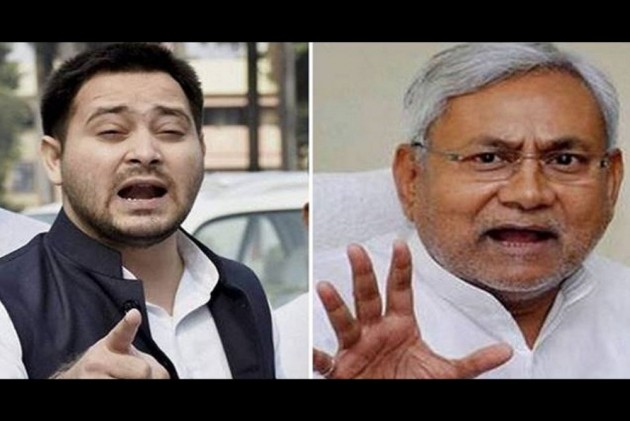 Bihar might be on the cusp of a major generational shift in politics as it perpared for Tuesday's counting of votes for the assembly election, with most pollsters predicting a landslide for the five-party Grand Alliance led by the young RJD leader Tejashwi Yadav.

Counting will be taken up at 55 centres across 38 districts where the outcome will decide the fate of the Nitish Kumar government that has helmed the state for a decade and half.

Most exit polls have predicted a rout for the ruling JD(U)-BJP combine and a resounding victory for the Grand Alliance (Mahagathbandhan) led by RJD's 31-year-old chief ministerial candidate Tejashwi Yadav, who has thrown down the gauntlet at redoubtable Nitish Kumar, the battle-scarred veteran more than twice his age.

The Election Commission is making sure that the winds of potential change cause no disruption in the counting process.

According to Chief Electoral Officer H R Srinavasa, central armed police forces have been deployed at the strong rooms, where the EVMs have been stored since the completion of voting, and the halls where these will be unsealed Tuesday morning after counting of postal ballots gets over.

The state has 243 assembly constituencies and the most keenly watched will obviously be Raghopur in Vaishali district from where Tejashwi Yadav is seeking re-election.

Kumar is a member of the legislative council and has not contested the assembly election.

Raghopur has been in the past represented by his parents Lalu Prasad and Rabri Devi both former chief ministers.

In addition, Tuesday's counting will also decide the political fate of nearly a score of ministers.

With much of the NDA's election narrative focusing on RJD's association with "jungle raj", an allusion to the alleged collapsed law and order during the 15 years when Lalu-Rabri ruled the state in succession, the fate of "bahubalis", leaders known for strong arm tactics, will also
be keenly watched.

Two of the most notorious criminal-turned-politicians- Anant Singh (Mokama) and Reetlal Yadav (Danapur)- are contesting on RJD tickets.

A win for the RJD-led coalition will bring a redemption of sorts for Tejashwi Yadav whose leadership abilities were called into question after his party failed to win a single seat in the Lok Sabha elections last year. The NDA had won 39 of the 40 seats and one had gone to the
Congress, an RJD ally.

It may also revive the fortunes of the three Left parties--The CPI, CPI-M and CPI-ML--which were consigned to near oblivion over the past two decades. The five-party
'Mahagathbandhan' also comprises these three Left parties, which were a force to reckon with in the past.

Election officials and district administrations face the daunting task of restraining supporters of political parties from crowding the counting centres amid the COVID-19 outbreak.

Prohibitory orders will be be place outside the counting centres to prevent people from gathering in large numbers, officials said.

According to Srinivasa, while 19 companies of the central armed police forces will be deployed at strong rooms and the halls where counting will take place, another 59 have been entrusted with maintaining law and order. Each company comprises roughly 100 personnel.