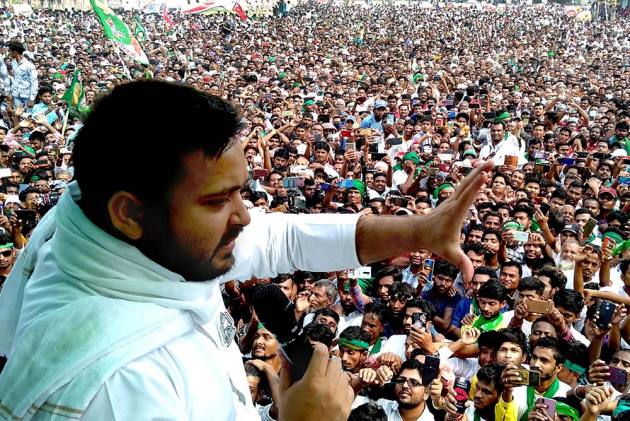 Several exit polls on Saturday gave the RJD-led Opposition alliance in Bihar an edge over the ruling NDA while at least three of them predicted a clear majority for the Mahagathbandhan which has projected Tejashwi Yadav as its chief ministerial face.

Most of the exit polls also predicted RJD to again emerge as the single largest party in the 243-member Assembly along with a clear dip in the seat tally of Bihar chief minister Nitish Kumar-led JD(U).

Counting of votes for the three-phase Bihar Assembly polls, which ended on Saturday, will be held on November 10. Exit polls are typically based on feedback from a limited number of voters in select areas and none of them have a 100 per cent accuracy record.

Today's Chanakya-CNN News18 projected 180 seats for the RJD-led Grand Alliance, 55 for the NDA and eight for others. The majority mark is 122.

The ABP-CVoter exit poll predicted NDA to get 104-128 seats and 108-131 seats for the Oposition Grand Alliance. It projected Chirag Paswan-led LJP to get 1-3 seats.

A similar trend was predicted by Times Now-CVoter, which projected 116 seats for the NDA, 120 for the Opposition alliance and a single seat for the LJP. It predicted six seats for others.

Republic TV-Jan Ki Baat exit poll also gave a clear majority to the RJD-led alliance with 128 seats, while it projected 104 seats for the ruling NDA, seven seats for LJP and four for others.

TV9 Bharatvarsh projected NDA to win 115 seats, the Grand Alliance 120 and four each for LJP and others.

However, ABP-CVoter projected a higher vote share for NDA at 37.7 per cent followed by the Grand Alliance with 36.3 per cent and 26 per cent for others.

India Today-Axis My India poll showed 44 per cent of respondents prefer Tejashwi Yadav as the next chief minister, while 35 per cent would like to give another chance to Nitish Kumar. It projected 44 per cent vote share for the RJD-led alliance and 39 per cent for the NDA.

At that time, the JD(U) had fought the election in alliance with the RJD and Congress among other parties, while LJP was in the BJP-led NDA alliance. The LJP had got two seats with five per cent vote share.

This time, JD(U) is back in the NDA, while LJP fought the election alone. During the 2019 Lok Sabha elections when both JD(U) and LJP were in the NDA, the alliance had won 39 out of 40 seats in the state.

Exit polls also predicted results for by-polls held in several states. According to India Today-Axis My India exit poll, the BJP government in Madhya Pradesh will survive as it projected the party to win 16-18 seats, and Congress is estimated to bag 10-12 of the total 28 seats that went to polls.

Similarly, for bypolls in Uttar Pradesh, the exit poll predicted BJP to win 5-6 seats, SP 1-2 seats and BSP 0-1 seat, out of the eight seats for which polling was held on November 3.

In Gujarat where voting happened for eight seats on November 3, the same exit poll projected BJP to win 6-7 Assembly seats and Congress a single seat.

The BJP is in power in Gujarat as well as in Uttar Pradesh.