The maximum turnout of 51.12 per cent till 3 pm has been recorded in Supaul district, and the minimum in Darbhanga (41.15 per cent). 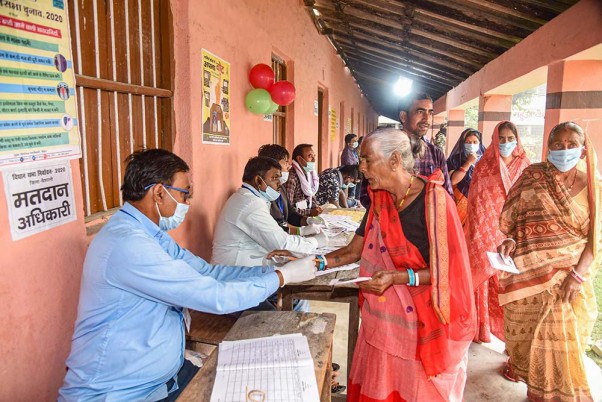 An estimated 55.02 per cent of the total 2.35 crore electors exercised their franchise
in the 78 assembly seats of Bihar where polling is underway in the third and final phase of elections on Saturday.

While the polling so far has been peaceful, police had to open fire in the air in Purnia to disburse a crowd trying to disturb voting, even as people boycotted voting at 12 booths in Katihar in protest against barriers not being set up at two railway crossings.

The poll opened at 7 am in these seats spread across 15 districts of north Bihar.

According to the Election Commission, the poll percentage at 3 pm was 45.91, higher than the corresponding figure for the second phase (44.51), but marginally lower than that for the first phase (46.29).

The maximum turnout of 51.12 per cent till 3 pm has been recorded in Supaul district, and the minimum in Darbhanga (41.15 per cent).

In Araria, RJD candidate from Jokihat seat, Sarfaraz Alam, courted controvery by turning up for voting with a party badge pinned in his shirt which is violation of the model code of conduct.

When asked about it, Alam smirked and did not make any comment.

Araria District Magistrate Prashant Kumar said the matter has come to his knowledge and lawful action would be initiated in the incident.

In Purnea, police had to fire in air to chase away people trying to disturb voting outside a booth under Dhamdaha assembly segment.

Voting is being held simultaneously in the Valmiki Nagar Lok Sabha seat, where a bypoll has been necessitated due to the death of JD(U) MP Baidyanath Mahto.

Madhepura district's Bihariganj, from where veteran socialist leader Sharad Yadavs daughter Subhashini Yadav is making her poll debut on a Congress seat, has recorded polling percentage of 48.30 till 3 pm.

Subhashini stood in a queue to cast her vote at a polling booth in Madhepura.

After casting her vote, the 30-year-old said her father, who represented Madhepura multiple times in Lok Sabha, has worked honestly for development of the constituency and that is why he is respected by people of all religions and castes.

Plurals Party president Pushpam Priya Choudhary, who is also her partys chief ministerial candidate, cast her vote with her mother in a booth at Darbhanga.

Speaker of the outgoing assembly Vijay Kumar Chaudhary and about one dozen ministers of the Nitish Kumar cabinet are in fray in this round of voting.

Meanwhile, people at 12 booths under Kusail panchayat in Kadwa assembly constituency of Katihar are boycotting the polls in protest against barriers not being installed in nearby Minapur and Jhaua railway crossings.

Block Development Officer Md Iftar and other senior officials have reached the area to persuade people to vote.

The first phase of voting for the 243-trong assembly took place on October 28 and the second phase on November 3.

The votes will be counted on November 10.