Bihar Polls: Pleas For Votes Heard Louder Than Those For Masks And Social Distancing

Bihar as of now is one of the least affected states within the country by the pandemic. 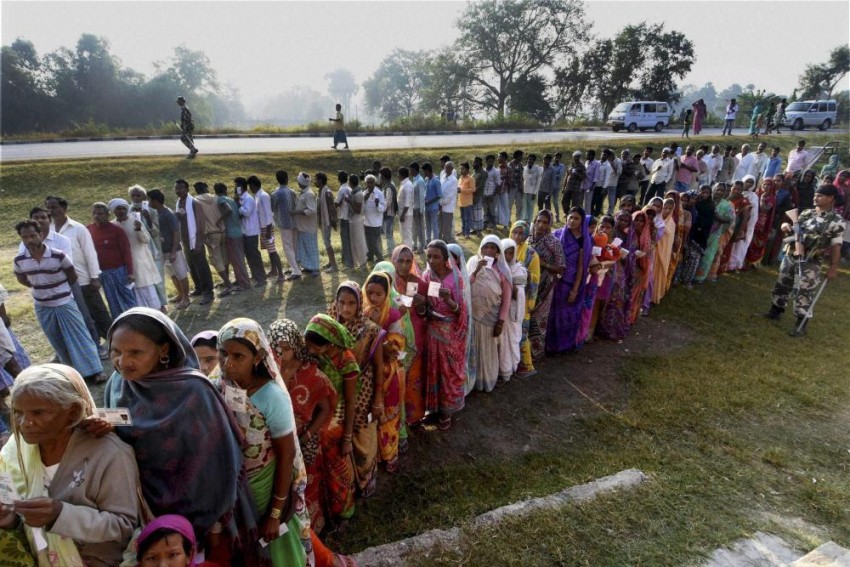 As Bihar was readying for polls, many wanted them deferred due to the COVID-19 pandemic. As voting draws to a close, it has been for everyone to see that people have gone about their business, including casting the ballots, with an air that they could not care less of all the health warnings.

The Election Commission's guidelines about social distancing and use of face masks were mostly practiced in the breach as big crowds came to hear leaders of various political parties across the state, even as the poll watchdog put in place elaborate mechanism to adhere to Covid-19 safety protocol inside polling booths.

That Bihar as of now is one of the least affected states within the country by the pandemic, which has severely times affected the normal life in many parts of the country, it has made people indifferent to concerns about the disease as they get on with their daily routine.

Government figures said on Friday that the state, India's third-largest by population, had only 6,356 active cases. Despite being one of the poorest states in the country, the official figures show it has a better recovery rate than the national average for Covid-19.

"Why should we fear Corona when we hardly see any impact of the virus around us" is the most common refrain across the state when people are asked about why they don't use face masks or maintain physical distancing.

However, several other theories, not endorsed by experts, including that the novel coronavirus does not affect people hardened by physical labor, also have some takers.

Several leaders, including Deputy Chief Minister Sushil Modi and BJP's in-charge for the polls Devendra Fadnavis, contracted the virus during the poll campaign.

However, it has had little impact on the majority of the people as they participated enthusiastically in the polling exercise without following the Covid-19 guidelines.

Officials said any strictness in enforcing the health guidelines might have been counterproductive and could have ended up curbing the people's participation in the humongous election exercise, the first since the pandemic outbreak.

The voting percentage in the first two phases of the elections has belied any concern about lack of popular participation with 55.69 percent and 55.70 percent of polling registered respectively.

While the first phase saw nearly one percent more polling compared to the 2015 polls, the second phase had a fall of less than 0.50 percent.

The last phase of the polls in 78 seats of the 243-seat assembly will be held on Saturday.

Several rallies of Prime Minister Narendra Modi, who has repeatedly made fervent appeals to the countrymen to follow the Covid-19 guidelines, saw BJP members giving masks to the people walking into venues.

At several political rallies, chairs were also kept at a distance but it all amounted to little ultimately as the masses in hundreds and thousands milled around at these meetings.

Bamboo barricades were broken by enthusiastic crowds at Yadav's rallies at a few places as they jostled to come close to the young politician.

While the state adhered to the tough lockdown like most of the country during the pandemic's early spread, people have become laxer with the reopening of the economy and resumption of normal life.