‘Congress knows how to run a country and how to provide employment, but we don’t know how to lie,’ Rahul Gandhi said taking a dig at Modi. 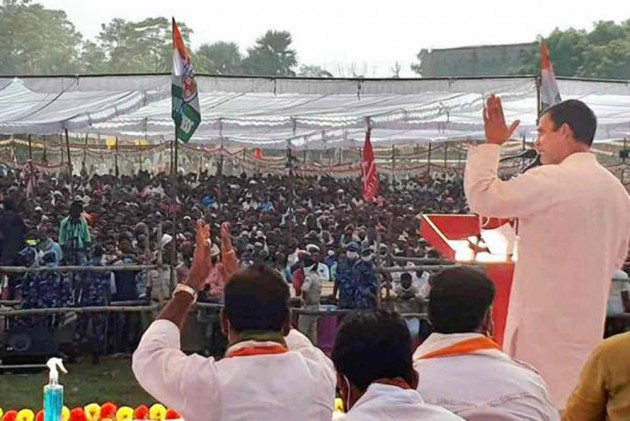 Congress leader Rahul Gandhi on Wednesday launched a scathing attack on Prime Minister Narendra Modi, claiming that the PM was indifferent to the various problems plaguing the country.

During his election campaign in Bihar’s West Champaran district today, the Congress leader also attacked Bihar Chief Minister Nitish Kumar over unemployment and on the issue of migration.

Addressing his rally at Valmiki Nagar, Rahul Gandhi said he was pained to see that Prime Minister Modi’s effigy was burnt in Punjab on the occasion of Dusshera, but added that it reflected the "anger" harboured by the country’s farmers and youngsters.

"Youths and farmers of Punjab, Bihar and Uttar Pradesh are angry that our PM keeps making speeches with Bihar Chief Minister and talks about other countries, but does not address the problems confronting our country such as unemployment," Rahul Gandhi said.

He also accused the prime minister of making false promises earlier regarding creating jobs and said that Modi had deceived the country’s youth. "I can guarantee that if the PM comes today and promises two crore jobs to youths, perhaps the crowd would shoo him off, telling him that he had lied earlier as well," the Wayanad MP said.

He also added that the “Congress knows how to run a country, how to stand with the farmers and provide employment, but we don’t know how to lie”.

Criticising the Centre over the three recently passed farm laws, he said that the BJP’s "pilot project" was implemented in Bihar in 2006 when the mandi system was abolished in the state. "What Nitish Kumar did in Bihar in 2006, Narendra Modi is doing in Punjab, Haryana and across the country," Rahul Gandhi said.