Robert Vadra wrote an emotional Facebook post expressing his firm belief in God which will help him tide over tough times ahead. 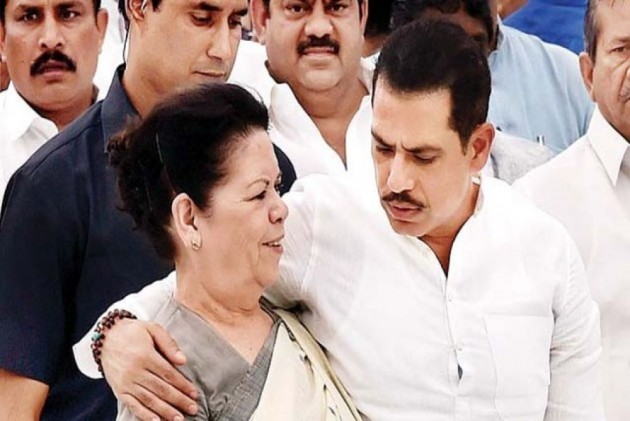 Congress president Rahul Gandhi’s brother-in-law Robert Vadra along with his mother Maureen, appeared before the Enforcement Directorate at its zonal office in Jaipur in connection with a probe into an alleged land scam in Rajasthan's border town of Bikaner.

AICC general secretary and wife of Vadra, Priyanka Gandhi Vadra accompanied them to the office.

This is Vadra's fourth appearance before the agency and the first in Jaipur.

On the last three occasions, he appeared before ED in Delhi in connection with a money laundering probe against him for his alleged role in procuring assets abroad.

The Rajasthan High Court had asked Vadra and his mother to cooperate with the agency after they approached it seeking directions that no coercive action is taken against them by the agency, following which the duo appeared before the ED in Jaipur.

The ED had registered a criminal case in connection with the deal in 2015, taking cognisance of a clutch of FIRs and charge sheets filed by Rajasthan police after the tehsildar of Bikaner complained about alleged forgery in the allotment of land in the area, considered sensitive due to its proximity to the India-Pakistan border.

It is understood that the agency wants to question Vadra about the operations of a firm — Ms Skylight Hospitality Private Limited — allegedly linked to him, which had purchased land in the area. It also wants to confront Vadra with the statements of those said to be linked to him.

Robert Vadra wrote an emotional Facebook post expressing his firm belief in God which will help him tide over tough times ahead.

"Not understanding the lows of this vindictive government to be harassing a senior citizen," Vadra said, describing how his mother had lost her daughter in a car crash, her ailing son to diabetes, and her husband as well.

"Three deaths and all I did was to ask her to spend time with me in my office, so I could look after her and we both could grieve on our losses," the 50-year-old businessman said, adding that now his mother was paying the price of "spending time in my office" by "being accused, maligned and called to be interrogated".

"If there was any issue or any illegality, which was found by the government, why did it take them four years and eight months to call me a month before campaigning begins for the general elections," said the husband of Priyanka Gandhi, who was launched as the Congress general secretary in charge of Uttar Pradesh east just days back.

"Do they think people in India do not view it as an election gimmick?!" said Vadra, whose wife accompanied him to the Jaipur ED office earlier in the day before leaving for Uttar Pradesh to meet party workers, after a roadshow in Lucknow on Monday.

Vadra said: "I always have adhered to rules and overall being a disciplined person, I have the ability to sustain any amount of hours of questioning and having nothing to hide, I will answer every question with respect n dignity.

"This too shall pass and will make me stronger."

And his post ended with: "What goes around comes around. God is with us."